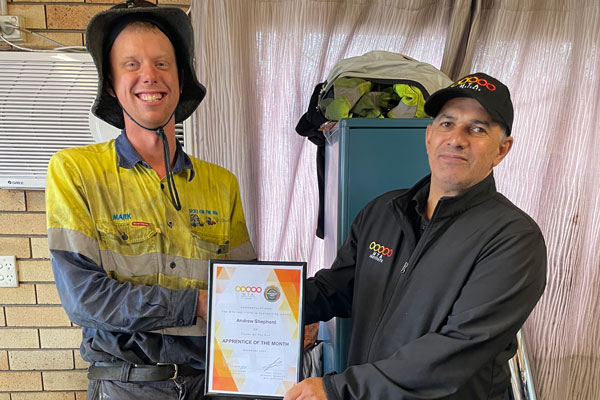 Andrew Shepherd is the Apprentice of the Month for November 2021.

The 23-year-old has actually completed his Heavy Commercial Vehicle apprenticeship and works as a fully qualified mechanic with Trucks On The Run in Toowoomba, a business that offers truck and trailer repairs and maintenance, mobile and on-site servicing, and a 24/7 breakdown service.

Andrew started with the business in 2016, working first as a casual trades assistant before being offered an apprenticeship. Having grown up on the family farm and being used to helping to repair and maintain the machinery that a farm needs to function, Andrew was well prepared for taking on a mechanical trade.

His original choice of trader was something agricultural but, at the time, opportunities were rare. However, armed with the enthusiasm to get cracking, Andrew was able to find work, and show off his skills, at Trucks On The Run.

“I grew up around tractors, trucks, ploughs, and planters so I have always had a mechanical interest and a basic knowledge of how some things work,” said Andrew.

“When I finished school in 2014, I was looking at getting in as a tractor mechanic but there wasn’t a huge demand for apprentices. So, I spent time on the farm and then I got a job as a casual trades assistant here and was offered the apprenticeship after about 8 months.

“It is a great place to work. We are looked after really well, everyone gets along and, while it is laid back, we do a great standard of work.”

And there is plenty of work to be done. Transport, agriculture and mining are big parts of the region’s economy, so the heavy commercial industry is essential and Trucks On The Run’s services mean Andrew and the team get plenty of experience.

“We do breakdowns – we’re on call 24/7 – and we have contracts to service trailers and trucks and do on-site repairs and so on. I get to do a fair bit of that,” he said. “Back at base, we do the big jobs like rebuilds on motors, clutches, and discs, as well as steering and suspension, and a bit of auto-electrical. We basically cover the whole machine – truck and trailer – from front to back.”

Regarding his training, Andrew said he was glad to have switched to MTA Institute after a couple of false starts with other organisations. The Institute’s in-the-workplace, one-on-one method of delivering the training worked well for him, he said, and Wayne Abrahams, his trainer, had delivered great support to see him complete his qualification.

“It was a good run once I came over to MTA Institute,” said Andrew. “And during the times when we were really busy here and I had a bit of trouble keeping up with my theory study, Wayne made room for that and helped along. The support was great all around.”

With his apprenticeship finished, Andrew can reflect on his journey and where he wants his career to take him. The draw of farm life is, not surprisingly, a strong one and after repaying the faith shown to him by Trucks On The Run, it may be that a farm is where Andrew will find himself again, armed with the mechanical skills to keep everything working smoothly.

“Long term I think I would like to go farming,” he said. “When I was on the farm, I would sometimes watch the professional mechanics come in and do their stuff and I always wanted to be able to do that – to be able to look at something, know what was wrong with it and fix it. And now I can do that, and that is a dream come true.”