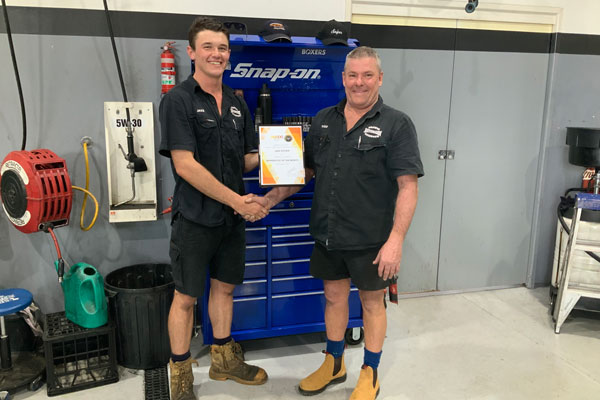 Jake Kither is the Apprentice of the Month for November 2020.

The 22-year-old light vehicle apprentice has impressed with his dedication to the job and his training, his customer service skills and professional attitude, and is closing in on completing his apprenticeship after three years of hard work.

Jake works for Browns Autobahn in Nambour on the Sunshine Coast. The business is owned by his father Todd, so it might have been expected that Jake would find his way into the automotive industry.

However, while he has always had a passion for cars and really enjoys the work, becoming a mechanic was not the career he initially imagined for himself.

“I actually wanted to be a helicopter pilot,” said Jake. “I enjoy heading out west and thought that I would go for my pilot’s licence and perhaps try heli-mustering on a station out there. However, getting a helicopter licence is an expensive business and I needed to earn some money.” The answer? Work at dad’s workshop. Not that working at Browns Autobahn would be something new to Jake – he had been helping out at the shop for years.

“I used to come in on my school holidays, from when I was about nine, and I would wash cars and sweep the floors and help dad out,” he said. “And every school holiday I would come in and I would learn a little more and do a few more things, and I developed a real passion for cars.

“I love working on them and I love driving them and after working here for a while, I asked dad for an apprenticeship.”

Working directly under the supervision of his dad has, Jake said, been a great experience.

“I thought working with dad might be a bit of a test, but it has been really good,” he said. “We get on well and I learn a lot everyday from him and the other guys here. He puts the pressure on sometimes but that makes you work harder and think more, and that is a good thing.”

Jake has done the entirety of his apprenticeship training with the MTA Institute and he is certain that the Institute’s method of delivering training in the workplace has suited him well.

“The one-on-one training really works for me,” he said. “You learn more that way, I think. You can ask a question and get it answered straight away, and it doesn’t take much time out of work either, so it works well for me and for the business. I’d definitely train like this again.”

And it is possible that may happen soon. With electric vehicles and hybrids certain to become more popular, Jake said he had considered further training. But whether he takes on another apprenticeship or not, decides to pursue his helicopter licence or not, he would, he said, be sticking with Browns Autobahn for a good while.

“I have thought about doing an auto-electrical apprenticeship at some point,” he said. “The way things are going it might be good to have that qualification.

“And I will definitely stick around and work for dad for a while,” he added. “He gave me this opportunity and has put in alot of time to train me, so I definitely will give him some time back.”