Apprentice of the Month, May 2021: Jake Chitham 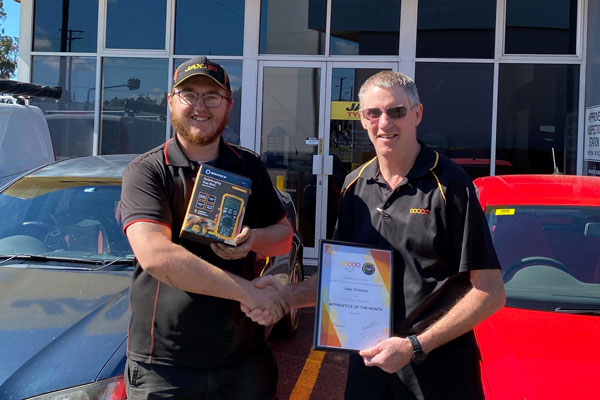 Jake Chitham is the MTA Institute Apprentice of the Month for May 2021.

The 25-year-old, who works for Jax Tyres Toowoomba, recently completed his light vehicle apprenticeship and as well as proving to be an outstanding student, he is, according to his employer, an equally outstanding employee who ‘loves his job, is 100 per cent involved, is great with customers and goes beyond his normal job role’.

Jake knows well the operation of the Jax shop – which offers the full range of mechanical services to customers – having worked at the Toowoomba location for more than nine years, starting there as a junior tyre fitter when he was 16. He had actually started his journey in the automotive industry even earlier than that, having left school to take a job as a trade assistant at a Yamaha dealership.

“Things were a bit quiet there and I was put off,” he said. “But then, one day, as I was on my way to go dirt bike riding, I saw a sign outside of the Jax workshop that read, ‘Junior Tyre Fitter Wanted’.

“I had my bike riding outfit on and had grease everywhere because I had been working on the bike, but I came in, talked to the owners, and they told me to come in the next Monday. That’s what I did, and I’ve been here ever since.”

During first those few years, Jake was able to get involved in just about every aspect of the Jax business. He started out tyre fitting, moved into wheel aligning and then into sales, before moving back into the workshop.

“I basically did a bit of everything, and then the opportunity came around for the apprenticeship and I jumped on that straight away,” he said.

Jake has always had a ‘fascination with anything that has an engine and wheels’ – an interest that likely finds its origin in the work of his father who was an interstate truck driver and who Jake would accompany on some of those long trips.

“Every school holiday, I would pack my bag, Dad would come and get me, and we’d be gone,” he said. “That was a whole lot of my childhood and I’ve seen pretty much every corner of the country.”

However, while the heavy commercial side of the industry did interest Jake, it was really cars that gripped his imagination and he has spent much spare time over the years working on his own cars.

All that tinkering, and the few years in the workshop before starting his training was great preparation for the apprenticeship and, according to Jake’s MTA Institute trainer David Twidale, he really shone as a student.

“Jake over-achieved through the term of his apprenticeship,” said David. “He has shown commitment, and the quality of his work was high and very consistent.”

The one-on-one training method that the MTA Institute delivers – with the trainer working with the students at their workplace – was, said Jake, the perfect way for him to complete his apprenticeship.

“I never really did too well at school, and really couldn’t stand to sit in a classroom with other people,” he said. “So, the fact that the Institute, and Dave in particular, comes here is great.

“If I had any questions during one of the modules or the training sessions, we could go out to a car here in the shop and work at it. It works really well.”
Although he is now qualified, Jake said that he may well do more training. Like many young people he recognises the value in learning other areas of the industry and is aware of the importance electric vehicles will play in the industry’s future.

“I may look at doing a motorcycle mechanic apprenticeship, but we do have to think about EVs,” he said. “We already have customers with EVs who come to us for tyres, and I have talked to David about them. It’s important to consider what options there are for training.”