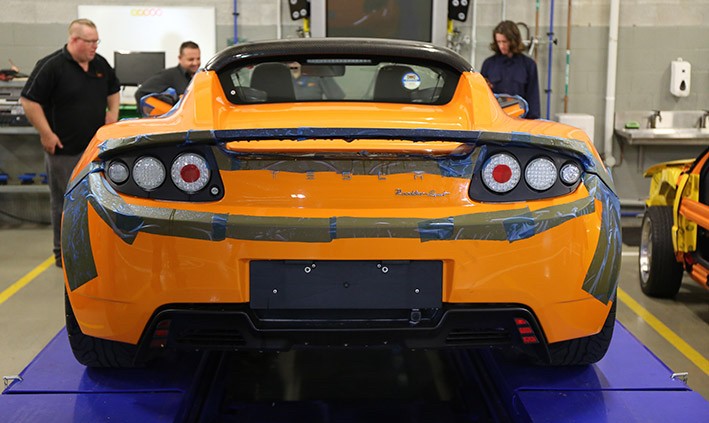 The Tesla Roadster Sport is a beautiful car. The all-electric, two-door speedster is quick too. Capable of 0-100km/h in under 4 seconds on the way to a top speed of 210km/h, the power generated from its monstrous battery pack and three-phase four pole AC induction motor is extraordinary.

The Roadster was Tesla’s first production car and, when it was launched in 2008, it set the standard for all the all-electric cars that would follow.

With interest in these cars now gathering pace (when Tesla revealed its affordable Model 3 in March this year, more than 400,000 orders were placed within a month) it’s not just those who enjoy jaw-dropping speed with an environmentally-friendly twist who have taken note of the technology that powers them.

Proactive in the training of automotive professionals and apprentices, the MTA Institute is a leader in the delivery of courses that focus on developing technologies and, at the beginning of May, a glorious, orange 2010 Tesla Roadster Sport rolled into the MTA Institute workshop to be a part of one such program.

The Roadster is currently hamstrung by a fault within its powertrain and is being used as a training tool for trade-qualified participants of the MTAI’s Advanced Hybrid Electric Vehicle course. Participants in the course, under the guidance of experienced trainer Paul Tugwell, are part of the team tasked with getting the Roadster back on the road.

“It has no power at the moment,” said Paul. “We have to find out why that is and then decide what to do to fix it. The Advanced Hybrid Electric Vehicle course runs over the next month and the students, who are all qualified tradesmen, will be involved in this project. We have a lot to do in four weeks!”

The Tesla is owned by Tony Bonanno, who sourced the car from Japan. Formerly the owner of the Valley Car Clinic business in Brisbane, and now the owner of interlockshop.com – which supplies and installs devices that prevent a vehicle from starting should the driver record an over-the-limit alcohol reading – Tony has been involved with the MTA Queensland for many years.

Now taking a number of courses with MTAI – including a trade recognition for Certificate III in Automotive Electrical Technology and the Advanced Hybrid Electric Vehicle course – Tony is excited about the future of electric cars and happy for the Tesla to be used as a training device.

“It’s basically why I got the car, and I have plans to bring in other electric cars from Japan just for educational use too,” he said. “I believe we need to start igniting the passion in our youngsters for this technology. The industry is changing and they have an opportunity now to get in on the ground floor as it changes.”

A keen racing driver and fan of petrol power, Tony was drawn to the possibilities of the all-electric car after taking Tesla’s Model S for a spin.

“I was taken aback by the Model S,” he said. “Being a petrol-head for years, I never thought of electric cars as a viable alternative. I think our understanding of them has to be revisited because they are not what people think they are. They are not slow or ugly. In fact, there are a lot of great characteristics about them.

“And after driving the Model S and becoming involved with MTAI’s training with Paul, I can see that electric cars are the future. Whether we like it or not, they are here to stay.”