Students’ Careers on the Move After Completing MTA Institute Courses

While the automotive industry has been seriously affected by the coronavirus pandemic and the subsequent lockdown and economic fallout, the services offered by all sectors of the industry – from mechanical servicing to panel repair to the retail of tyres and spare parts – continue to be needed as the wider community returns to a semblance of normality. It is true that some sectors may take longer to rebound, but rebound they will as more and more of the restrictions imposed across the country ar removed.

Recognising this, MTA Queensland and MTA Institute continue to move forward with training solutions created both to prepare students to enter the industry and prepare businesses for the technological shifts of tomorrow.

The Auto Camp course and the Certificate II in Automotive Vocational Preparation course are two such programs designed for young people considering a career in the industry. And they have proven to be extremely popular. Not only with youngsters who, through the courses, get an introductory level of training in mechanical knowledge, as well as an understanding of how a workshop is run and what is expected of them, but with businesses looking to take on an apprentice who not only has some basic skills but also, and perhaps more importantly, now knows a career as a mechanic or other trade technician is truly one they want to pursue.

“The three-day Auto Camp course is designed for students aged 14-17 and gives students a hands-on experience, in a workshop environment, of a range of different automotive skills, ranging from the principles of hybrid technology to vehicle maintenance,” said Anthony Bonaccorso, Business Development at MTA Queensland.

“It offers a great experience for those with an interest in electronics, engineering and mechanics and really is a terrific way for schoolkids to get an idea of what a career in automotive entails.

“The Cert II pre-vocational course is run over five weeks and is more in-depth,” added Anthony. “It gives students a set of basic automotive skills, and includes units on identifying automotive mechanical and electrical systems and components, and how to use and maintain tools and equipment in a workshop environment. It introduces them to the various career opportunities in the industry and is a real launching pad for that career.

“It has been tremendously successful in engaging young people and enabling them to see how challenging and exciting a career in automotive can be. And it has inspired and instilled the confidence in many to go on and take up apprenticeship opportunities.”

For 17-year-old Daniel Geraghty and 16-year-old Thomas Turbill – both of whom completed the courses and were taken on as apprentices at local workshop businesses – the Auto Camp and Cert II programs proved to be the pathway into the industry that they had been looking for. 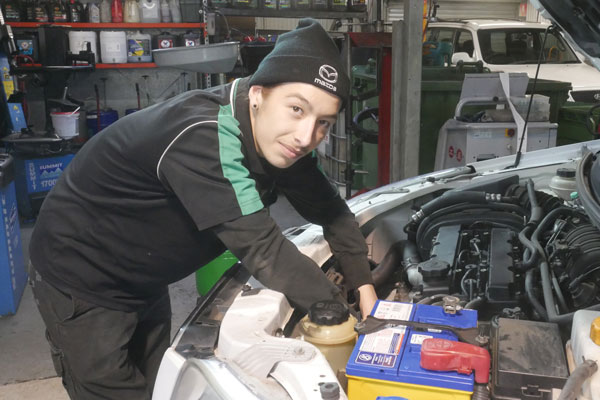 Daniel Geraghty is just 17 and began his apprenticeship with Ultra Tune Indooroopilly at the beginning of 2019. He is expected to complete his training in about 12 months’ time and can put getting through his training so quickly down to his passion for automotive and the foundations laid by the Auto Camp and Cert II pre-vocational courses.

While attending a Pathways college – which, in part, works to identify and develop avenues for students aged 15-17 to access post-school education, training or employment – Daniel was able to land places on both courses. Completing them was, he said, one of the best things to happen to him.

“MTA Queensland got in contact with the school and asked if they had any students interested in doing the Auto Camp course and I said yes straight away,” said Daniel. “And as soon as I walked into the workshop, I loved it. I didn’t want to go anywhere else.”

Following up on Auto Camp with the five-week Cert II course was a no-brainer.

“I got on really well with Anthony Bonaccorso at the Auto Camp course and as soon as that finished he called up my school and told them about the pre-vocational course and how much he would really like to see me attend. I jumped on that opportunity too.

“It was described as the course where you’d find out if you really want to work in automotive or not, and I knew straight away that I did.”

From there, the hunt was on to find an apprenticeship for Daniel, and MTA Queensland was able to help out once again, setting up a meeting with Fran Bulley, owner of Ultra Tune Indooroopilly in Brisbane, who had contacted the Association about her own search for a quality apprentice candidate.

For Fran, who with husband Peter has owned the Ultra Tune Indooroopilly store for 14 years, contacting MTA Queensland for help in finding an apprentice just made sense – all but one of the many apprentices who have worked at her shop over the years were trained by the MTA Institute, and several completed the Institute’s pre-apprenticeship courses.

“Those that come through the pre-vocational course clearly have a bit of experience and when they come into the workshop, they have some skills and are savvy about hoist operation and so on,” said Fran. “Those courses do give them a bit of knowledge and an understanding about what to expect.

“I had contacted Anthony after I saw a pre-vocational course was being held and asked if he had anyone coming through who was looking for an apprenticeship and was from around this area,” added Fran. “He identified Daniel, said he was really keen, and we went from there. And Daniel is turning out to be an excellent apprentice. He is one of the good ones.

“And it is important to get the right person,” she said. “If you have the wrong person, it doesn’t matter how hard you try to train the skills, you’re never going to end up with a mechanic. But you know that the kids who come through the MTA Queensland course have an inkling of what they are in for.” 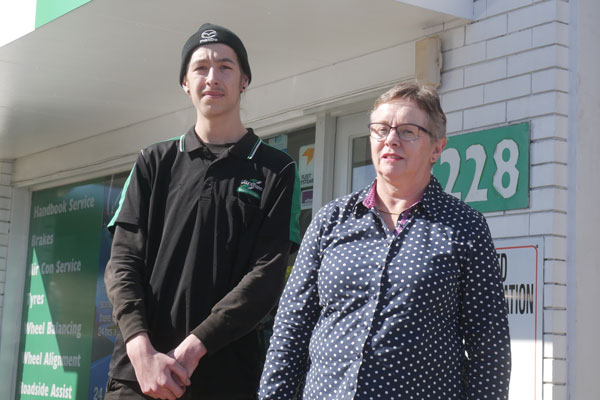 For Daniel, being able to pursue his passion for cars with a business that services all types of makes and models is a fantastic learning and working experience.
“There’s a lot of variety that comes through here and that is really good and challenging,” he said. “I don’t particularly like working on the European cars so much – it feels like they are designed to not give you the room to work on them! – but it is all good practice.

“When Anthony lined me up with Fran, I think I got lucky and everything fell into place and I just ran with it,” he added.

“Not to sound cheesy, but this has honestly turned my life around. I couldn’t ask for anything more, and I wouldn’t go back and change anything. It has been great.” 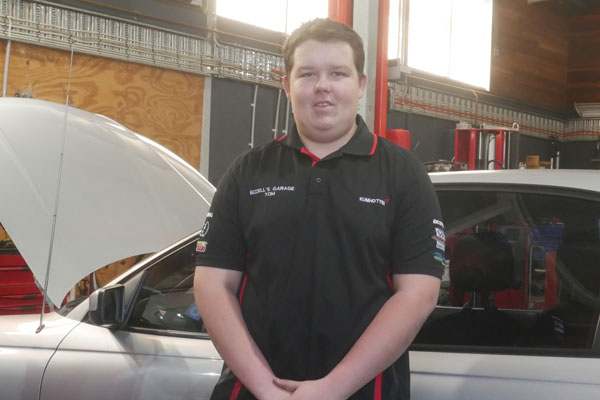 Bizzell’s Garage is something of a Brisbane institution. The mechanical workshop, service station, tyre specialist and Repco Authorised Service Centre has been located in the same spot in the suburb of Paddington since 1939 and has been owned by the Bizzell family for those entire 81 years.

Today, the fourth generation of the family – brothers Garrett and Brendan – work at the business. Their father Robin is there too, having put in a mighty 59 years on the tools so far.

Over the decades, a fair few apprentices have come through the Bizzell’s workshop and today that long list includes Thomas Turbill – perhaps the youngest light vehicle apprentice in Queensland.

Thomas turned 16 in June, four months into his apprenticeship and a handful of months after completing both the Auto Camp and Cert II pre-vocational courses.
For a young bloke fascinated by cars, the courses were the first steps to a career in an industry for which he has a real passion.

“I have always been interested in cars and was doing some backyard mechanical work with my brothers and sisters on their vehicles,” he said. “Then my dad saw the MTA Queensland courses being advertised and said to me, ‘Why don’t you do these and see where they take you?’.

“So, in October last year, I took part in the Auto Camp course and then completed the pre-vocational course in February this year. After that, Anthony at MTA Queensland recommended me to Garrett, who I then spoke to about coming in for a trial day at Bizzell’s. That day went really well, and I got the job. That was about three months ago, and I am absolutely loving it!

“Those courses were excellent as a foundation for this apprenticeship and I would go back and do them again if I could – they were a lot of fun!”

For Garrett, who runs the workshop side of the family business, deciding to employ someone who was recommended to him by MTA Queensland was a simple decision to make.

“We had been looking for an apprentice for a while and got in touch with MTA Queensland who said they had a young fella who was keen as mustard,” he said. “Thomas didn’t have a driving licence, so we were a little worried about how he would go about getting here and so on, but he was enthusiastic, and MTA Queensland said they thought he would be a good fit. For them to say, ‘This kid is great, put him on’ was the stamp of approval that made our decision easy.

“And Thomas has been great. He has been with us for only four months or so and everything has been good so far.” 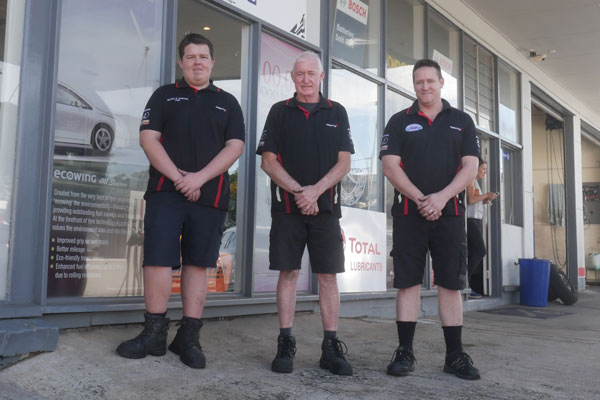 Impressed with the pre-apprenticeship courses and how it prepares young students for the workshop environment, Garrett, who did his own apprenticeship through the MTA Institute, is also a fan of the onsite training system used by the Institute for its apprentice training delivery.

“The one-on-one training method is very good,” he said. “You could read a book all day but not really know what to do until you’re there physically doing the job and looking at it yourself. All the books in the world don’t give you the experience of being in the workshop, of knowing the sounds, of being able to diagnose a problem. The onsite training really works.”

“The Auto Camp and Cert II courses that MTA Queensland run really are a fun introduction to the automotive industry for young people,” said Anthony Bonaccorso. “But not only do the courses give students some basic automotive skills, they also give them a real feel for whether a career in automotive is something they want to pursue. Ultimately, of course, if they decide that it is, then MTA Queensland can help them find potential employment and apprenticeship spots within the industry.

“For automotive businesses looking for an apprentice, these courses are clearly a benefit too,” he added. “Employers really are interested in taking on an apprentice who has demonstrated a real interest in the craft and who has learned some basic skills and understanding of what is expected within a workshop. For businesses that are often comprised of small teams working in a busy environment, an apprentice with those abilities and who is raring to go is priceless.

“And it makes everyone at MTA Queensland and the MTA Institute proud to see the graduates from these courses really step up, grasp the opportunity and flourish within the businesses that now employ them.”

Apprentice of the Month, May 2020, Ethan Reid
Scroll to top