All vehicle manufacturers – whether manufacturing cars, trucks, motorcycles, or buses – are in some way electrifying vehicles.

It is no secret that manufacturers spend billions of dollars annually to meet automotive emissions targets, and various methods of vehicle hybridisation have been developed by vehicle and component manufacturers to reduce average CO2 emissions levels across their product range.

At first glance, identifying a hybrid vehicle may seem obvious. The definition of a hybrid vehicle is one that relies on two different power sources for motion. However, a range of electrical technologies have been implemented into the modern car which can improve efficiency and engine torque available to drive the wheels. For example, legacy systems such as the traditional alternator have been improved in their operation to recover otherwise wasted energy and free up additional engine torque when required. In some cases, the alternator can double up as a 3-phase motor to start the engine and provide additional torque to the ICE (Internal Combustion Engine) on demand. Combined with stop-start systems, fuel savings of around 8 per cent can be achieved, in addition to a reduction in CO2 emissions. A myriad of other technologies such as electric turbocharging, electric steering and so on can further increase efficiencies and blur the line between a conventional vehicle and a micro-hybrid vehicle.

The power sources of HEV’s (Hybrid Electric Vehicles) are typically petrol and electricity. Hybrid vehicles can be classified in different ways.

One classification refers to the amount of electrification contributing to the power output of the vehicle. This is split into three categories: micro-hybrid, mild-hybrid and strong hybrid.

Another classification refers to how the electric motor/s work in conjunction with the vehicle’s drivetrain. The classifications are, typically, series, parallel, and series-parallel.

A third classification will determine whether the vehicle’s battery can be charged with an external charger in addition to having an on-board motor/generator which is driven by an ICE. On the other hand, the vehicle may simply rely on the internal combustion engine linked to a generator with no external charge facility – namely PHEV (plug-in hybrid EV) and HEV.

Despite the categories mentioned, almost all modern vehicles incorporate some level of electronic management aimed at increasing efficiencies and reducing CO2 emissions. Therefore, it could be argued that some degree of hybridisation has crept into all modern vehicles.

Modern internal combustion engine-powered vehicles take advantage of an electronic battery management system controlling the alternator’s output remotely. In this system, when power is demanded, the alternator load on the engine is reduced by decreasing the alternator’s rotor field strength, making additional torque available to drive the vehicle at the expense of battery charge. The alternator field is increased on deceleration and braking, taking advantage of the vehicles kinetic energy to charge the battery. This type of battery management provides greater cyclical demand on the battery which necessitates the need for AGM (Absorbent Glass Mat) or EFB (Enhanced Flooded Battery) lead-acid batteries. A current-shunt or inductive clamp will be used to monitor charge entering or leaving the battery. The shunt assembly typically measures voltage, temperature and current and is communicated via a data bus to the controlling ECU. As an example, an inductive clamp can be seen on the negative battery cable of a VE Commodore with a LIN bus connection to the BCM, providing information to the ECU of the battery’s state of charge. On other vehicles, you may notice a current shunt on the negative battery terminal. Further investigation of the controlling ECU’s actual values/live data will reveal three important values used in calculating the battery state of charge: battery temperature, voltage and current.

Mazda i-ELOOP (a regenerative braking system) takes this idea a step further by varying the alternator output between 12V and 25V. Under normal conditions, the alternator performs as a standard 12V alternator. On deceleration, the alternator output voltage is increased to charge a capacitor, taking advantage of the vehicle’s kinetic energy. A DC-DC converter steps the voltage down to be used by the car’s electrical components. The engine is relieved of driving the alternator for periods of time which increases fuel economy and reduces CO2 emissions. 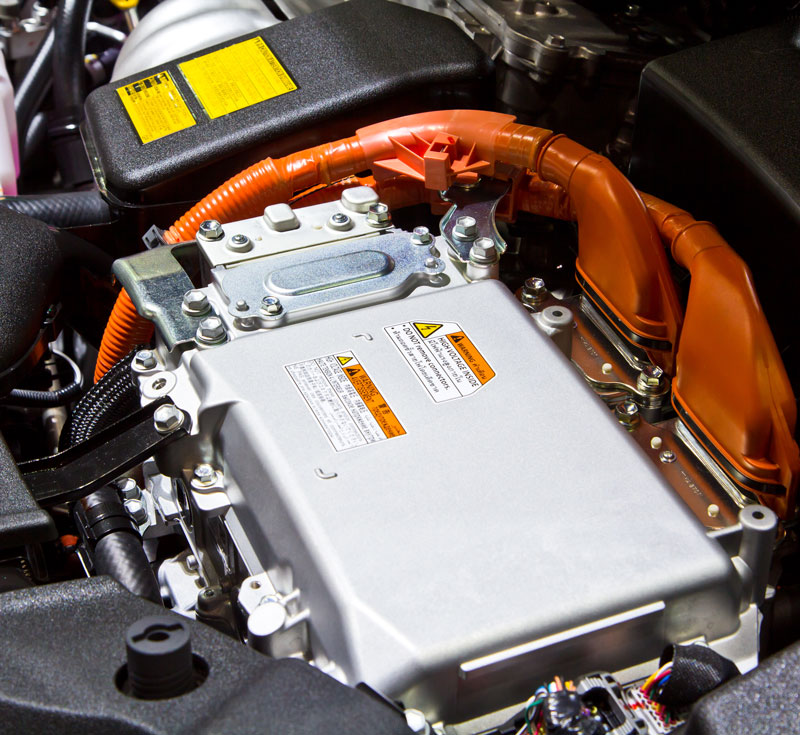 There are many electrification choices available to design engineers. However, one system that has proven to be a viable option is the 48V mild hybrid system.

The 48V system has the advantage of providing four times the power capability of the legacy 12V system (P=V x I) while keeping the voltage level below 60V which substantially reduces design and component costs associated with high-voltage vehicles. The additional power capability can support improved steering, braking, suspension, electric turbocharging, and hybridisation of the vehicle’s driveline.

A 48V system can provide additional torque to an existing ICE on demand and is capable of recuperating otherwise wasted energy on deceleration/overrun.

Existing mild-hybrid systems are slowly adding 48V loads but, in the main, use a centralised 48V to 12V DC-to-DC converter so that legacy 12V components and architectures can be used, thus reducing overall costs to the build design.

One type of design which has gained some traction is to decentralise the DC-DC converter by installing smaller/lower power modular units throughout the vehicle close to, or built into, the 12V loads. 48V is far more efficient to distribute than 12V due to a reduction in I²R losses (voltage drop). Smaller modular DC-DC converters can take advantage of newer topologies using higher switching frequencies, providing a reduction in size and weight. In a 48V system, the current will be four times lower with 16 times less overall power loss.

Strong Hybrid vehicles employ motor-generators with power ratings above 25kW. In order to provide the higher power levels a high voltage system is needed. The high voltage system introduces added electrical system design costs and complexities which are associated with full EV’s. As discussed in my previous article, high voltage isolation, leak detection, isolated CAN etc., are all mandatory for vehicle systems over 60V. The added design complexity and higher-voltage rated componentry adds significant cost to the build of the vehicle. Strong hybrid systems usually have the ability to be driven for some distance in pure electric mode.

Although it is beyond the scope of this article to discuss all of the various hybrid system designs peculiar to each manufacturer, it is important to be aware that hybridisation comes in various forms and is implemented into almost all modern vehicle design. We need to familiarise ourselves with the various systems, operating principles and safety precautions working with HEV/EV components.

Things are changing rapidly in the HEV/EV sector. Large electronics corporations that were once identified with making domestic appliances and the like are making huge investments into automotive R&D – everything from fuel cells to batteries, more efficient semiconductors, software and so on.

While the job of a modern technician is not to design and develop this technology, we need to understand how to deal with it, provide support, identify business opportunities, and adapt to future technological trends.

The MTA Institute is a provider of accredited HEV/EV training focusing on a range of technologies relevant to the demands of a modern workshop.

Until next time work safely and take care.