Magnetic force is the basis of electric motor design. It is called the ‘motor principle’ because this force changes electrical energy to mechanical energy via conductors placed within strong magnetic fields. These repel each other creating movement.

Lines of force in the magnetic field force can be called flux. This force is created by groups of atoms aligning in the material. A bar magnet, for example, has the strength of the flux coming out each end, and these form close parallel loops in three dimensions around the magnet. 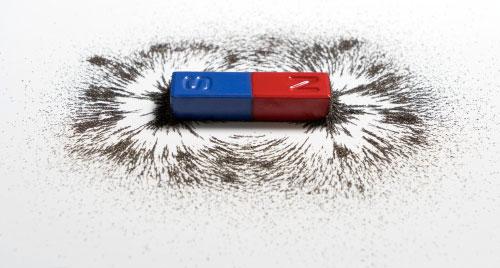 Force does not move like electric current, but the lines of force do have direction.

Magnetic flux cannot be insulated, and magnetic force will pass through anything if it is strong enough. However, there are materials that will slow down the penetration of the force.

Magnetic force lines tend to concentrate in permeable materials as force will always follow the path of least resistance.

These substances are divided into classes for their magnetic properties:

The relationship between electricity and magnetism was discovered in 1820 by Hans Christian Oersted and was developed further by others, including Michael Faraday who established the Law of Induction that showed how a magnetic field interacts with an electric circuit to produce electromagnetic force – the basic principle for the operation of electric motors.

These devices were DC (direct current) machines and used commutators. These commutators were the weak link in these motors, and it took a man with genius and imagination to see what could be done to improve things,

That man was Nikola Tesla, who saw the problem brushes caused on a generator by sparking and burning the commutators.

AC motors are used in EVs and their power is rated in kilowatts. Before this metric terminology was used, they were rated in horsepower (HP).

In my next article, I will start discussing electric motor design and the – induction motor – also known as the AC asynchronous motor.

Remember, the MTA Institute offers skill sets training in this subject and later in the year we be offering courses in electric vehicles.