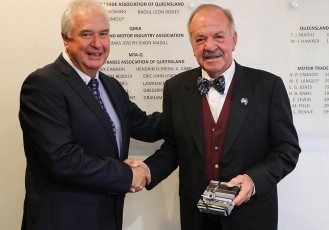 Len Daddow, the former Dealer Principal of Daddows Auto Group (Coorooy and Noosa) was awarded Life Membership of the MTA Queensland at the annual MTAQ Board meeting in October in recognition of his service to the Association and lifelong involvement with the motor trades.

Len’s career in the industry is an inspirational one. In 1950, aged just 15, Len began his career as a mechanical apprentice with E.G. Eagers and Son in Brisbane, and from that humble beginning he would go on to enjoy a career that would see him become a successful business owner and industry leader through his involvement with both the MTA Queensland and the Australian Automotive Dealers Association Queensland (AADA Qld) – a body he would serve as President on two occasions.

From his early years as an apprentice mechanic, Len would go on to work with Eagers’ Claims Department before being appointed GM-Holden’s State Service School Instructor following the company’s takeover of direct distribution of Holden in 1958. He would also spend time as the company’s Service Representative for the State’s southwest region.

In 1966, Len moved into the new car business himself, purchasing Cooroy Motors which, at the time,
was a Holden dealership. During the early Seventies he purchased land at Noosa Heads, establishing a Mobil service station, and in 1974 Len acquired the Honda car franchise, starting an on-going relationship with the brand that would end only this year with his selling of the business.

AADA Qld came into being in 1974 and Len became a Board member in 1985, serving two terms as the Association’s President from 1997-99 and 2009-2012. This position would also see him involved in the organisation of the Brisbane International Motor Show, an event that, in 1999, attracted more than 100,000 people to the Brisbane Convention and Exhibition Centre.

The automotive industry has, said Len, been a tremendously rewarding one but it’s not just about the business relationships. Serving his community has brought its own rewards too.

“I’ve been to many places, been around the world with the people and businesses I have worked with and met and developed wonderful friendships,” he said. “And I’ve also sold a lot of nice cars to a lot of very nice people!

“Not long ago I was lying in a hospital bed and a young woman came to see me and said, ‘Mr Daddow, you sold me a Honda Jazz.’

“That was a lovely moment and came completely out of the blue!”

As a member of the MTAQ since 1966, Len has been unwavering in his support for the Association.

“The MTA Queensland exists for the motor industry, and if you are in the industry you must become a member,” he said. “You will receive far more from the Association than you will ever give, and it has been very important to me to have been involved with the MTAQ over all that time.

“It has been very rewarding and I have thoroughly enjoyed it – the returns have far exceeded what I paid in membership fees!”

It is an honour for us at the MTA Queensland to have Len accept the offer of Life Membership to the Association. His great experience and exhaustive knowledge of the industry is a tremendous resource and we look forward to continuing to receive his counsel and advice for many years to come.