Ashley Beusche, an MTA Institute fourth-year spray painting apprentice with 4H Smash Repairs in Darra, has won a gold medal at the WorldSkills Australia Regional Competition in Vehicle Painting, held on the Gold Coast in April.

The 23-year-old endured a full day of intense competition, which included a number of tough assessments, to beat five other gifted young apprentices from the Brisbane area and take the top spot.

As a regional gold medallist, Ashley will now move forward to take part in the 2016 WorldSkills Australia National Competition, to be held in Melbourne in October. 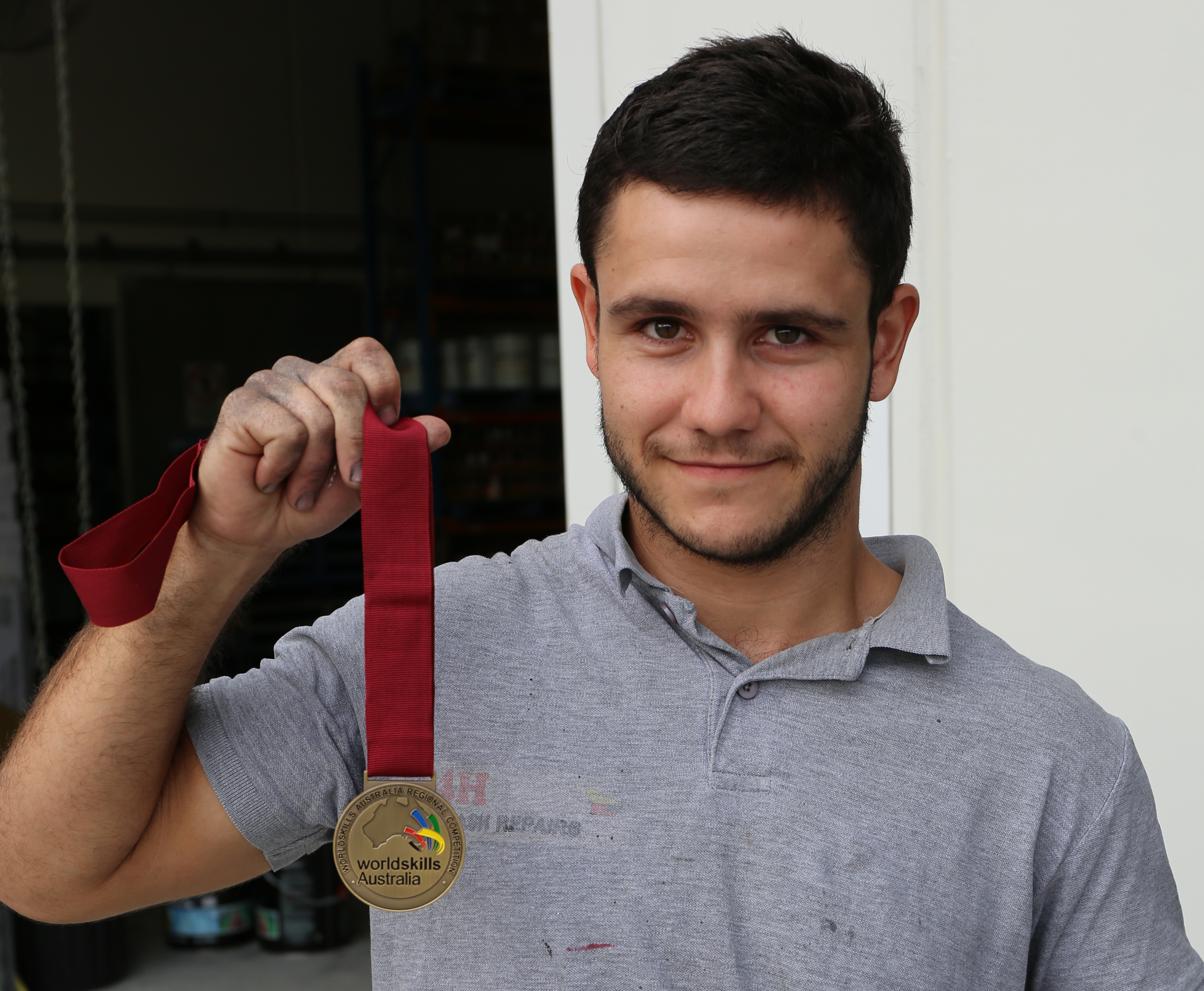 Designed to develop the skills of young people, WorldSkills Australia competitions are held across the country and across a huge range of trades and disciplines, including many of the automotive trades. Regional Competition winners move on to the National Competition and, should they win there and meet certain eligibility criteria, can go on to represent Australia in the 44th WorldSkills Competition to take place in Abu Dhabi, UAE, in 2017. For Ashley and Jac, who are both too old to move forward to the International Competition, victory in Melbourne would instead see them be eligible to apply for an international BBM study scholarship overseas.

Ashley was thrilled with his win and the opportunity the competition gave him to test his skills against other apprentices.

“The regional went really well, and I was excited and proud to win,” he said. “I was a bit nervous going in but confident with the work I did. And I enjoyed it – I wanted to see how I stacked up against other apprentices and wanted to have the opportunity
to go further.”

It was, said Paul, a challenging day for the apprentices, but was part of a wider event that would inspire them.

“The WorldSkills competition is something to which young spray painting apprentices can aspire,” said Paul. “And it’s great for their development. Some of them have never been on a plane or traveled before, and when they win a regional they get to go to wherever the national is being held and, if they’re lucky enough to win there, then they could go on to take part in the international event.”

Paul and his team tested the apprentices across a range skills.

“We looked at everything from safety, preparation, attitude, their respect for each other and, of course, their ability to apply the Standox Waterborne basecoat and VOC Clearcoat along with the design work they were required to mask,” said Paul. “We marked them on those elements, but also the cleanliness of their panels, the application method and how their panel looked, as well as the final finish. It was a big day!

“And the standard was high,” he added. “General application of clearcoat and basecoat was very good and the range of scores, from 73 to 81, shows how close things were. In fact, both gold medal winners scored exactly the same on 81. So it was very tight.

“To separate everybody, it really came down to the accuracy of measurements and details around the masking of the design they had to make.”

The Axalta team also provided some post-competition advice to the apprentices, with Qld Axalta Trainer Kevin Herbert giving them insight into the spray painting trade, focusing on elements including the importance of colour, of using a quality pressure gauge and investing in the right type and number of spray guns.

For Ashley, his focus now is on taking what he has learned, the advice he has been given and the experience he has gained from the Regional Competition and from working in his family’s business, and taking that to Melbourne and the National Competition.

“I’ll keep working day to day and doing my usual things, and I think I will go on a few training days,” he said. “It will be exciting to go up against people from around the country in Melbourne. Hopefully, I can win!

“I think, if I perform well on the day there’s no reason I can’t win.”