On Monday 23rd January, industry experts and those passionate about automotive innovation joined forces at the MTA Institute $10million state-of-the-art training facility, allowing attendees a privileged glimpse into the type of vehicles leading the future of the automotive world. On display was a repowered Mazda MX5, a Mitsubishi i-MiEV and a Telsa, Model S, each vastly different representations of what electric vehicles can offer, but all showcasing the quiet and efficient performance that electric cars are associated with. 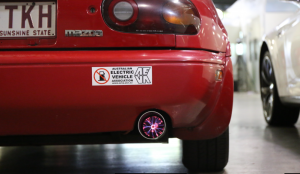 The repowered 1990 Mazda MX5 owned by Dave Keenan, who alongside Mike Van Emerik and Jeff Owen undertook the mammoth task of building an electric powered  vehicle from scratch in 2009. Dedicating one day a week over the span of four years, Mr Keenan with his background in electrical and computer science transformed the vehicle from the ground up into an electric car well beyond its time. Successfully using trial and error and a wealth of electrical knowledge, the resulting vehicle has more power, better handling than its predecessor and contains a battery that delivers 130km on only 8 hours of charge, costing under $2 in electricity. 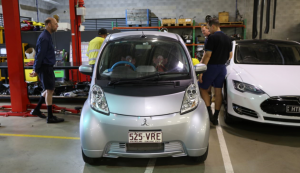 Robert Davies, owner of hybrid and electric vehicles, personifies a true enthusiast. Presenting a 2010 Mitsubishi i-MiEV, this compact car is designed for city driving and exhibits a silent commute, regenerative  braking and instant throttle response. The i-MiEV also represents the ‘green effect’ that electric cars offer – no exhaust fumes, no fuel consumption and the ability to charge on solar panels. Mr Davies, the Director of Greenfield Power and an expert in clean energy is passionate about the financial and commuting convenience of owning an electric vehicle, and also the very real benefits electric vehicles have on the environment.

Finally, owned and showcased by Charles Inder, the Telsa Model S, which Is the leader in electric vehicle innovation. Mr Inder having owned the vehicle since 2016, made the decision to purchase one after building an Electric vehicle in the past, and experiencing first-hand a Tesla owned by a friend. He was taken with the elegant, yet minimalistic interior, the instant response and the raw power Tesla is famous for. Offering more power than its fuel-driven competition nothing feels quite so futuristic as a drive in a Telsa. Being keyless, controlled and connected 24/7 via phone app, offering instantaneous acceleration and regenerative braking, this car can deliver 450km on only a few short hours of charge, costing virtually nothing to maintain. With an acceleration of 0-100km in under four seconds, not only is the Telsa an incredibly fast, luxurious and beautifully designed vehicle but it is also considered one of the safest vehicles on the road.

In addition, MTA Queensland will host ‘Carmageddon’ on Tuesday 7 March, to brain storm the implications of the automotive digital disruption. Email your expression of interest to attend this one-day forum to [email protected]

Save big on SP Tools 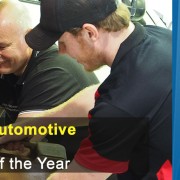 CEO, Dr Brett Dale welcomes you to 2017.
Scroll to top