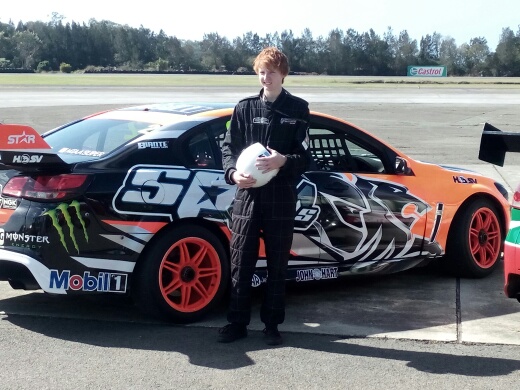 MTA Institute student, karting and high-powered motoring enthusiast, Jayden Bulmer, was recently treated to a day behind the wheel of an SP21 Holden V8 Supercar at Adrenalin – a custom-built 2.1km circuit on the Gold Coast.

Jayden, 19, an apprentice with Maryborough City Auto’s, is currently completing the second year of his training through MTA Institute. Like most of his peers studying automotive trades, he’s a fan of anything with four wheels and an engine.

Exposed to the trucking industry from an early age through his parents, owners of the Wide Bay Molasses stock feed suppliers, Jayden was first inspired to undertake his apprenticeship through his long-term hobby – karting.

With Jayden’s passion for karting in mind, his Aunty very fittingly gifted him the V8 Supercar experience, knowing it would go down a treat with the young petrolhead.

On the day, Jayden had five supercars to choose from, and said his choice was a bit of a no-brainer.

“There were two Fords and three Holden V8 Supercars, and naturally I chose a Holden. I picked the Holden SP21 . . . I’m not a Ford man.”

Initially guided around the circuit by a professional driver in a stock Holden SS, Jayden was given a few pointers on when and where to brake before being handed the keys to the Holden SP21 V8 Supercar.

From there it was ‘pedal to the metal’ madness.

“I was driving the car at 160kph, on a very a tightly weaving track. I managed to catch the guy who started before me, and I really enjoyed the experience because its really similar to karting,” he said.

With three years left to go before becoming a qualified Mechanical Technician, Jayden’s passion for speed means he has set his sights firmly set on a career working with aftermarket and high performance vehicles.

May 31, 2016/by developer
Dane Turnbull is the MTAQ Student of the Month for May