Working in Twidale Aut and Motorcycles in Goondiwindi, Jack said he was humbled to receive the award. 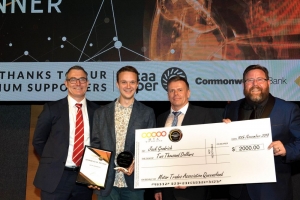 “It was a massive surprise, a real shock. It’s nice to be recognised but I still don’t feel like I really deserved it as a lot of the other boys did really good work.”

Jack entered the automotive industry in a unusual way. Only a few years ago Jack was studying a degree in biomedical science before completing his honours in a Brisbane laboratory in the field of stem cell research.

Jack said despite the degree, he had always wanted to do an apprenticeship and when his partner got a job in Goondiwindi, Jack managed to secure an apprenticeship with Twidale and the automotive career became a reality.

Jack’s desire to learn and develop his skills was part of what made him such an outstanding apprentice and a pleasure to work with.

“Jack always gives 100 per cent and leaves nothing behind,” said Zak Zuiderduin, his trainer.

“During his training he would always be one step ahead. He was a terrific student – passionate about learning and enthusiastic.

As well as an outstanding apprentice, Jack also cemented himself as a great guy when he decided to donate his $2,000 award winnings to Youngcare, MTA Queensland’s official Charity Partner on the night he was announced as the Apprentice of the Year.

“Whatever direction he takes he will be a great ambassador for the industry as his career develops. Jack will succeed at anything he puts his mind to.”