Jack Goodrich: 2018 Apprentice of the Year

Jack Goodrich, a recently qualified light vehicle mechanic with Twidale Auto & Motorcycles in Gonndiwindi, is the MTA Queensland Apprentice of the Year for 2018.

Presented with the accolade at the MTA Queensland Industry Dinner on 10 November, Jack, 27, said he was humbled to receive the award and shocked when his name was called out – a feeling that, a few days later, he was still not quite able to shake.

“It’s still a bit surreal,” he said. “It was a massive surprise, a real shock. I didn’t think I would win. You think about it, of course, but it never feels like a realistic expectation.
“It’s nice to be recognised but I still don’t feel like I really deserved it as a lot of the other boys did really good work. I never really felt I had done anything that exceptional. It might take a while to sink in!”

Attending the Industry Dinner with Jack were his dad Tony and fiancé Chandni, both whom were, of course, extremely proud of his accomplishment.

“They were pretty excited,” said Jack. “I think my fiancé said she was proud of me about 20 times, which was very nice. I’ll take that!”

Equally proud were Mel and Ben Twidale, Jack’s bosses at Twidale Auto & Motorcycles. Though they were unable to make it into Brisbane for the event, Melissa said the couple, and indeed the whole team at Twidale, were kept up to date with proceedings via phone messaging. 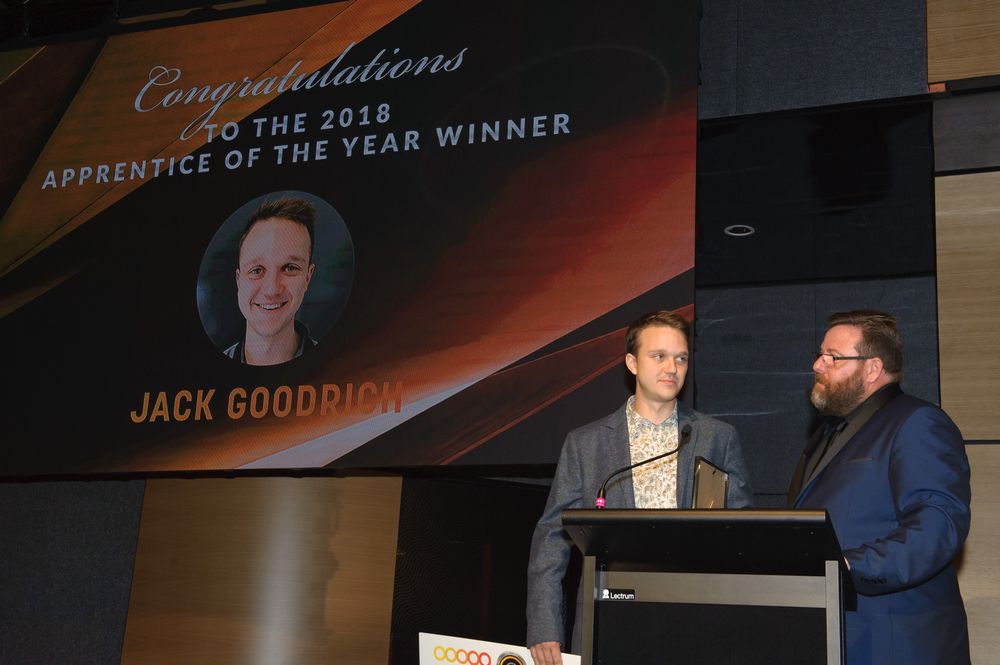 “We were talking to Jack throughout the night via messenger,” said Melissa. “We have a group chat set up with all our staff and he was able to keep us all informed, and that was great because this – seeing one of us reach this height – is something that makes the whole team proud.”

Jack has travelled an interesting road to get to the Apprentice of the Year award.

At one time, the automotive industry was not the industry in which he seemed destined to carve out a career. Go back a few years and Jack was completing an honours degree in biomedical science before working for a year in a Brisbane laboratory in the field of stem cell research.

From there to repairing and maintain cars in a workshop does seem like something of a leap.

“I had always wanted to do an apprenticeship but, like many people, I went to university because that’s what was expected to get a good job,” said Jack. “But I knew it wasn’t for me and when I finished my honours, I went to work at a bicycle shop and intended to become a bike mechanic. However, my fiancé got a job as a paramedic in Goondiwindi, so we ended up moving out there.”

Although always interested in cars, it wasn’t until Jack reached Goondiwindi and secured an apprenticeship with Twidale that a career in automotive became a reality. And there might not be a better place to learn the trade than Twidale. With the company comprised of an automotive service and repair workshop, a Suzuki and Kawasaki dealership, and a 4×4 business, there’s opportunity to work on a wide range of vehicles, which makes for a pretty solid grounding for any apprentice.

And Jack made a good impression right from the start.

“I remember when Jack first came here, and Ben told him to replace a starter motor. Jack wanted to know why we were replacing it and why had it failed. Ben told him that after they had replaced the old one, they could pull the it apart to see what had gone wrong,” said Melissa.

“That was great because it showed Jack wanted to know and understand what had gone wrong. And that is a valuable thing because you want apprentices to understand what you’re doing – you don’t want them just to be parts fitters.”

Jack’s desire to learn and develop his skills was part of what made him such an outstanding apprentice and a pleasure to work with.

“Jack always gives 100 per cent and leaves nothing behind,” said Zak Zuiderduin, his MTA Institute trainer. “During his training, for example, he would always be one step ahead. When I opened new units, he would work on them so that when I came back to do the training on those units, he already had good basic knowledge of the subjects and we needed to just tune the finer points.

“He was a terrific student, passionate about learning and very enthusiastic. The training sessions were something he looked forward to and that made my job very easy.”

While Jack may not yet be convinced that he deserved the Apprentice of the Year win, there’s no doubt he was an outstanding apprentice and is a damn good bloke. The evidence of that was clear at the Industry Dinner when, after hearing about the work of MTA Queensland’s charity partner Youngcare, Jack promptly donated his $2000 prize to the organisation.
It was an act of generosity that made more than few jaws drop. 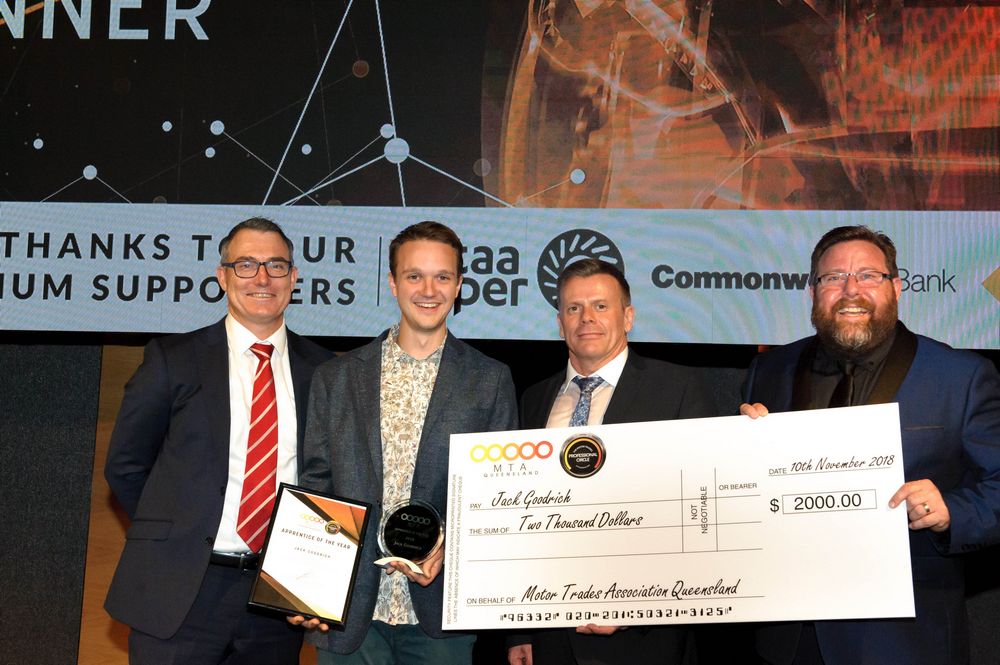 “I didn’t think that I really needed it,” said Jack. “Youngcare do a lot of really good work, and I thought it would go a lot further with them than it would with me. It just made sense – It wasn’t my money in the first place and I wasn’t expecting it, so why not give it to someone who really needs it?”

While the donation was accepted, MTA Queensland did ensure that Jack received $1000 to help him celebrate his award win in style.

So, what happens now? Well, there’s a wedding to organise and with his fiancé Chandni securing new employment in Stanthorpe, a move is also on the cards in the new year.

It’s a tough call for Jack to make – the family-like environment at Twidale will be missed – but life goes on and the move may be a spur to more training.

“Mel and Ben have been very good to me and I want to give them as much as I can before my wedding in February when I leave,” said Jack. “I don’t have a job organised in Stanthorpe yet, but I would love to find a work as a mechanic or possibly even in a new trade – I’ve always been interested in the electrical side of things, as well as paint and panel.”

Whatever direction he ends up taking, Jack will, said Zak, be a great ambassador for the industry as his career develops.

“Jack will succeed at anything he puts his mind too,” he said. “The question really is where does he want to go?”