We know it won’t be long before Hybrid Electric Vehicles (HEVs), Electric Vehicles (EVs) and eventually autonomous vehicles, will be the main source of traffic on our roads, but in the meantime HEV/EV enthusiasts have a seemingly long wait as the general public continue to be educated on the roadblocks they believe are in their way.

The main roadblocks include:

Volatility: Consumer interest in alternate drivetrain systems fluctuates. The major OEMs need to see a profitable route ahead in order to ensure the timely development of the technologies now on the road map.

One of the biggest contributors as to why Australians aren’t switching to HEVs/EVs comes down to the lack of government support and incentives. Manufacturers continue to do their bit by developing low-emission cars, but the public will continue to purchase petrol cars without the proper education, support and incentives provided by the government. If fuel prices continue to remain high, this should change when the government begins to offer grants to reward the buying public with green energy vehicles.

Infrastructure needs: Consumers need to feel confident that they can access charging stations easily and conveniently

Queensland are leading the way in HEV/EV infrastructure with the government beginning the process of building an electric highway from Cairns to the Gold Coast. Westfield have also started to put in fast charger stations at shopping centres across the state and Tesla already has infrastructure in place which allows 10 minutes of free charge to EV’s.

Historically when oil prices are low, HEV/EV vehicle sales reflect this and are in turn become very low. This is because the public are more inclined to buy HEV/EV vehicles when oil/petrol prices are high and they begin to consider alternative power sources. Consumers still remain ignorant to the fact that the cost of a HEV/EV, although initially higher, will benefit the user in the long run and oil fluctuations make much less of an impact.

Alternative power plant buy-in:  Consumers need to believe the new powertrains are safer, more efficient, more precise and more drivable than the power trains of the past.

Before EV’s take over on our roads, HEV’s are expected to become the number one choice of vehicles on our roads. This is due to the environmentally friendly aspect but also to curb the anxiety of running out of charge and having the petrol aspect to fall back on for peace of mind. HEV batteries are improving every year becoming lighter and more energy efficient. NiMH and Li-ion will be the main source for the next 10 years and the public need to be assured that they can trust this alternative power source.

Without government incentives, Aussies are looking at a much larger upfront cost for a HEV/EV than purchasing a petrol car of the same size and capability. The cost as we know, evens out over time, saving big dollars in the long term, but the price should continuously lower over time as popularity and economic kick in and more units are sold. Manufactures need economic help to lower the price, which in turn would help customers. A survey was done by the courier mail in late September, they ask six people in the street, all different age groups, that if an electric car is comparative price to a non electric car would they buy it, all said yes.

There are many other smaller roadblocks in the way of HEVs/EVs becoming mainstream, but Australia’s main issue in lagging behind other countries comes back to the government, and its lack of support, both educationally and financially for HEVs/EVs.

I, and the other trainers at the MTA Institute, will continue to lead by example with the Institute soon taking delivery of a Mitsubishi Outlander PHEV. It has a DC fast charger that recharges the battery to 80% in 30 minutes and I look forward to using this as a learning tool for students. The MTA Institute is confident that the skills and knowledge taught in our HEV courses will become mandatory as HEVs and EVs gain traction and I will continue to lobby for the courses to become accredited. 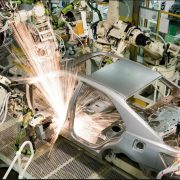 MTA Institute speeds into the future
Nominate now for the 2018 Queensland Training Awards!