Elliott Lemmon, a light vehicle apprentice with Greg Tunstall Mechanical in Ormiston, near Brisbane, is the MTA Institute Apprentice of the Year for 2017. 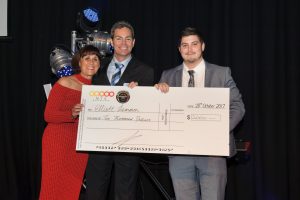 Presented with the award at the MTA Queensland President’s Ball, Elliott said it was a great honour to win the accolade and an awesome and surreal experience.

“It was an amazing evening,” he said. “I was feeling good but my heart was certainly pumping just before the announcement! And when they did say my name, I certainly was shocked.”
Receiving the award from Craig Lowndes was a special moment for Elliott. As a motorsport fan, meeting Lowndes was a highlight of the evening, even if he can’t remember too much of the moment,” To be honest, I can’t really remember what I said or what happened on stage. Craig said congratulations but the rest is mostly a blur,” he said with a laugh. “He is someone I have looked up to for a long time and meeting him in person was inspirational.”

Attending the Ball with Elliott were a throng of supporters – his mum and dad, his boss Greg Tunstall, his supervisor Andrew Avis and wife Rhiannon, and his girlfriend Chelsea – and things got a little emotional once he returned to the table.

“Mum was crying, and Dad, who isn’t an emotional person, had a few tears in his eyes too. They were very proud!”

Proud too, sums up the reaction from Elliott’s boss, Greg Tunstall, who took Elliott on as an apprentice nearly four years ago and knew immediately that he was a pretty special recruit.

“When I first interviewed Elliott I could tell he had the right credentials,” said Greg. “He was already building his own car, he was a nice guy, clean cut, well spoken, had common sense and the right personality to fit into the shop,” And these, said Greg, are prerequisites to work at Greg Tunstall Mechanical.

“We’re not a normal mechanical shop,” he said. “We specialise in Land Rovers and old English cars – and that work on old English cars means we can deal with customers who are a bit eccentric! We’re working on their ‘babies’, so there’s often a lot of customer interaction. As Elliott knows, it’s not always about being a mechanic – you need to be able to talk to clients, figure out what they want and look after them – there’s a lot to it.”

Elliott has been living and breathing cars for years, tinkering with all things mechanical since he was a child. That passion has seen him experiment with his own cars, race karts, work with motorsport teams, become a member of the MTAQ Racing Team Support Crew and become a valued part of the Greg Tunstall Mechanical team.

“He has real enthusiasm and dedication,” said Greg. “He could talk about cars until the sun goes down, is involved in everything and really wants to learn new skills all the time.”
That commitment to learning shone through in his training and makes Elliott a pleasure to teach said James Dixon, his MTA Institute trainer.

“Teaching someone like Elliott makes my job easier. He is someone who is really passionate, asks lots of questions and is just a sponge who thrives on that information,” he said. “Sometimes you forget he is a student. He has a maturity about him way beyond his years and I think he will be a great role model and pass on those skills to apprentices he may take on himself down the track.”

With the title of Apprentice of the Year now his, Elliott has the pleasant task of deciding what to do with the $2000 and $250 travel voucher he received as part of the award prize.

“I think I’ll put that $2000 towards saving for a house. Every little bit helps,” he said. “And I’ll take a trip down to Melbourne too – I haven’t been there before.”

Other than that, for the moment, he said, it was back to work and that was just fine, “I have to worry about my books again and concentrate on finishing my apprenticeship,” he said. “I have three modules left and am looking to finish early next year. I’m still learning and will still be learning once I have finished my apprenticeship. But this is not really a job, I love what I do – I think I am pretty addicted!”

November 8, 2017/by Clancy
Congratulations to the graduating AccelR8 Students