MTA Institute (MTAI) Board Director, Professor Michael Milford has been recognised with a top award by the 2019 Australian Academy of Technology. 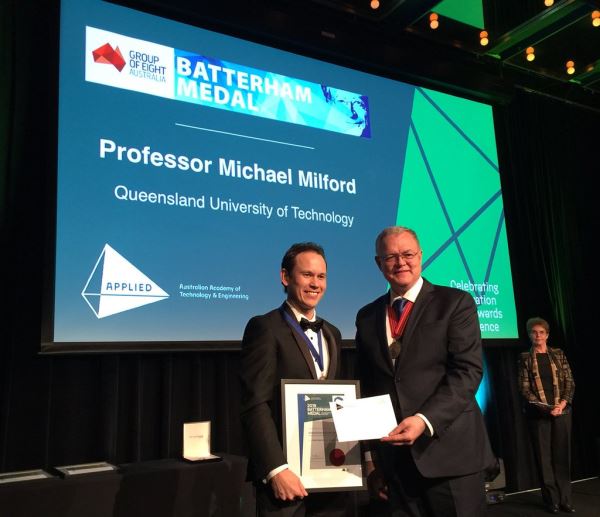 Professor Milford is a QUT engineer at the cutting edge of the development of autonomous vehicles and robotics and was presented with the prestigious Engineering Batterham Medal in recognition of his work over the past five years.

The Batterham Medla was established in 2014 and is awarded annually to a graduate engineer who has achieved substantial recognition for their work over a five year period.

“More than ever, we need knowledge creation, technology and innovation that can be harnessed to drive commercialisation and economic and social benefit.

“Professor Milford has made a tremendous contribution – translating abstract neuroscience concepts into rugged technology that can be trialled for real-world applications.”

Professor Milford’s work includes researching the boundary between robotics, neuroscience and computer vision at the Australian Centre for Robitic Vision at QUT, Brisbane and his latest project involves the Queensland Department of Transport and Main Roads (TMR) and the iMOVE CO-operative Research Centre.

Part of this project saw him take an intelligence system on a 1,200km road trip of south-east Queensland.

“The big problem that faces autonomous vehicles right now is that at the moment they don’t drive as well as humans in all possible conditions,” Professor Milford said.

“We’re targeting how the car might use infrastructure, such as lane markings and street signage, to help it to drive well.”

“I’m proud that our team’s work has been recognised by this Learned Academy,” Professor Milford said.

MTAI extends their congratulations to Professor Milford and his team on this immense achievement.