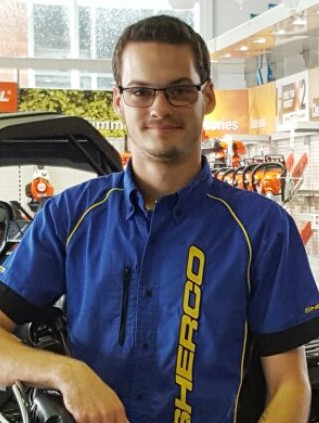 Liam Smith is the MTA Institute Apprentice of the Month for August. The 20-year-old, fourth-year mechanical apprentice, working with Coastal Farm and Motorcycles in Innisfail, is proving himself to be a top-notch employee and student who is going above and beyond in his studies.

“Liam works well as part of this workplace team, has demonstrated a happiness to do anything asked of him and has demonstrated very good customer relations,” said MTA Institute trainer Scott Buckley. “He’s what you want in any student, and displays dedication to all aspect to his apprenticeship. His work books are well researched and always completed on time, and he has always demonstrated an eagerness to learn.”

Having recently celebrated his twentieth birthday, Liam has spent the last four years working to realise his childhood ambition of becoming a motorcycle mechanic.

“I have grown up with motorbikes and dirt bikes. After I graduated high-school I started working for Coastal Farm and Motorcycles and they offered me full-time work. Three to six months into the job, I decided I wanted to study to become a motorcycle mechanic,” he said.

An avid fan and owner of several Honda motorcycles, and an endurance-rider in his free-time, Liam has his eyes on a head foreman position upon graduating from his apprenticeship in late 2016.

“The head mechanic here would like to do 2-3 days per week when I finish, and they want me to run the workshop,” he said.

When his trainer Scott was asked about why he put forward Liam for the nomination,
his answer was quite simple.

“Liam has a really impressive knowledge of motorcycles, a large variety of small farm equipment, and ATV and small engines equipment. Credit where credit is due, Liam is an absolute asset to his workplace.”