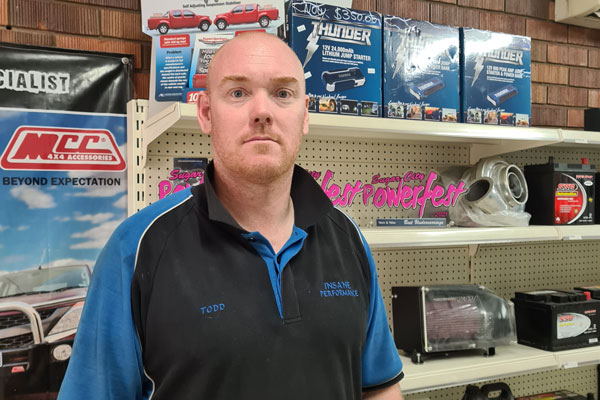 Todd Marshall is the MTA Institute Apprentice of the Month for October 2021.

The 38-year-old works for Insane Performance in Rockhampton and actually completed his training in September, reaching the apprenticeship finish line in a little over three years, with his MTA Institute trainer Lloyd Cross commenting that Todd ‘has a thirst to learn and is always researching to improve’ and is a person who takes enormous pride in his work.

Starting an automotive apprenticeship in your mid-30s is something of an unusual move, but Todd always had a passion for cars. He helped his father work on his cars when he was a child, and has owned, modified and built drag racing cars since he was a teenager – a pastime that enabled him to develop fabricating and welding skills that he could easily have built a career around.

However, as sometimes happens, a person can find themselves following a different path than the one that seems obvious and Todd would spend several years as a qualified butcher, then several more in the construction industry, during which time he would gain a Certificate III in Chemical Processing while working at a chemical plant. But it was those skills learned building his own cars that would ultimately see Todd make the switch to the automotive industry.

“I have always been into cars, and drag racing in particular,” said Todd. “Since I was 18, I have always had a drag car or a street car, and I have always worked on them myself, making what I needed.

Todd’s skillset becomes apparent when you catch a glimpse of his current drag car – a 1975 Ford Cortina that can run the quarter-mile in 8.2 seconds at 162mph (260km/h).

“I’ve had that car for about five years and bought it as a drag car, but it was sort of unfinished,” he said. “It was really a shell with a roll cage when I got it, and I rebuilt the roll cage, built the differential – the diff housing – the rear suspension, fabricated the front suspension, used lightweight components, and the engine is a turbocharged LS1 that runs on methanol and produces about 1000hp (745kW). My focus is 1/8-mile racing and I have done a 5.1 at 120mph (193km/h).

It was for these skills, developed over years, that Todd ended up working with Insane Performance. The business offers a broad range of services – from logbook servicing and general repairs and maintenance of regular passenger vehicles, through to 4WD diesel ECU remapping and DPF solutions, to full-on performance work including race car fabrication and engine upgrades. It’s a place where someone with Todd’s interests fits right in.

“When I finished up at the chemical plant, I thought I might have a couple of months off work, but a mate showed me on Facebook that Insane Performance were looking for someone and I ended up here,” he said. “I started as a fabricator, doing work on exhausts and race cars, but about three months after starting, I was offered an apprenticeship.

“And while I do a bit of everything and love the work, it is the performance side of things that I really enjoy, that’s for sure.”

While Todd’s journey to becoming an automotive tradesman may have been longer than most, becoming a mechanic and being able to work in the performance field is clearly very satisfying.

“I have no real plans now,” he said. “This is where I want to be, and I am really enjoying what I am doing!”

The Road Less Travelled: An Apprentice of the Year’s Journey
Scroll to top