Apprentice of the Month, May 2020, Ethan Reid 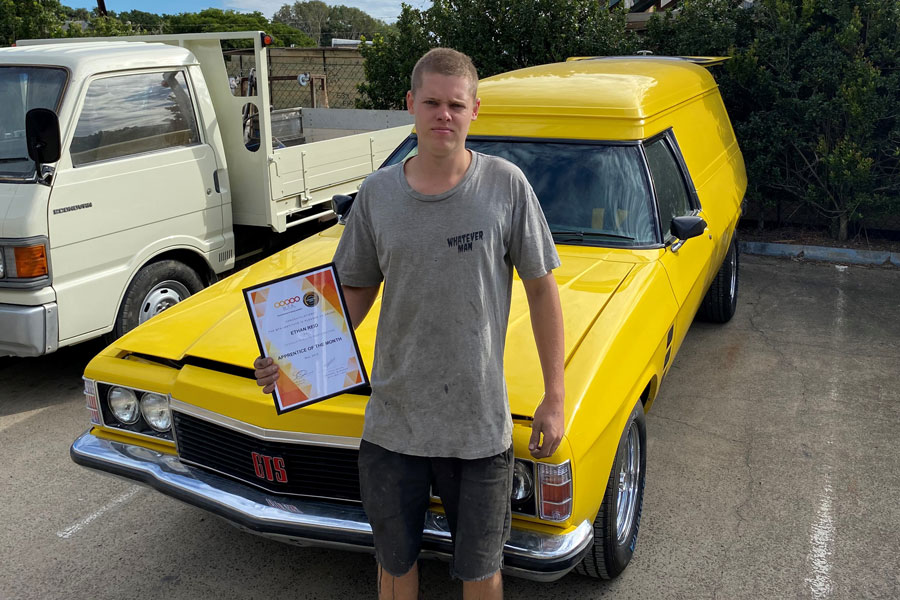 Ethan Reid is the apprentice of the month for May 2020.

The 23-year-old, second-year panel beating apprentice has been working at Totally Classic Restoration in Warana on the state’s Sunshine Coast for the past couple of years and for a young bloke with a passion for cars, it must be one plum job.

Why? Because Totally Classic Restoration works on some pretty special vehicles and learning your trade while helping to build unique custom cars while also restoring some great motors from the past is a real gift.

“We specialise in restorations, but we do quite a lot of custom and high-end, one-off builds as well. It is pretty good to be here!” said Ethan.

“We have quite a few cars on the go at the moment. We’ve got an HK sedan drag car we are doing a bit of work on, we’re nearing the end of a ground-up restoration of a VK Commodore, we have a couple of Jags in, and a Chrysler by Chrysler sedan that is one of less than 500 ever made. We do some interesting stuff.”

Getting to work on cars was something Ethan always wanted to do, but for a few years, he grafted as a roofer. Then, one day, he decided that it was time to pursue the career he really wanted and he approached Totally Classic owner Gerry Coppleman for a job.

“I have been passionate about old cars pretty much my whole life. While I was a fully qualified metal roofer I really wanted to follow my dream and work on cars . . . and it was getting too hot on the roof!” said Ethan.

“I went and knocked on the Totally Classic door when I had a day off from roofing, but Gerry said he didn’t have any work for me at the time. I waited a while, came back and asked again, and then he called me back a couple of weeks after that and I started the following day. He gave me a shot and I worked for a bit over six months before starting my apprenticeship.”

While Ethan works primarily as a panel beating apprentice, he also gets to try his hand at some paintwork – something he enjoys and has plans to take on as part of his career moving forward – and that has led to some pretty unique jobs.

“It is great to be able to do some painting, and I recently worked on a 1913 locomotive!” he said. “It was once used in Buderim, then went to Townsville for a while before coming back down here. We had the opportunity to do some restoration on it and I was working for about 8 hours on the gun! Hopefully, in the near future, it will be put on display in Buderim.”

The Totally Classic team is a small, dedicated unit working in a sector of the industry that demands those in it be dedicated to their work. And that’s just what his colleagues are, said Ethan.

“There’s plenty of responsibility working on these vehicles, but we know what we are doing and what needs to be done and get on with it. It’s a great workshop, a great bunch of people and pretty special.”

Students’ Careers on the Move After Completing MTA Institute Courses