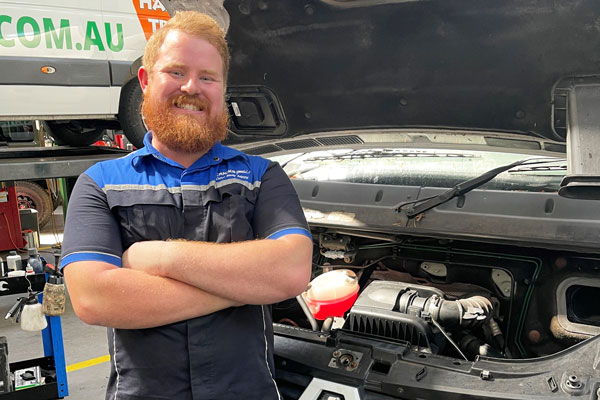 Joshua Frampton is one such driven individual.

Now 25, the fourth-year light vehicle apprentice with the Cricks Maroochydore new car dealership is the Apprentice of the Month for March 2021 and, remarkably, is in the 11th year of a long-term plan that has seen him not only near completion of his apprenticeship but also earn a business degree – all with the goal of owning a successful mechanical workshop business of his own.

“I’ve had the plan to open my own mechanical and restoration shop since high school,” said Joshua. “Originally, I did think about going straight to train as a mechanic, but my father – who spent decades in the industry working in wrecking yards, as a parts interpreter and a painter – told me that I should look at owning my own business. So, that’s what I planned. I worked at it, went to uni and completed a Bachelor’s degree in business management and international business and then went for the apprenticeship.”

Such commitment is paying off, and Joshua being named as apprentice of the month comes down to his enthusiasm, skill, and a drive to perform that his employer said sees him go ‘beyond in all aspects of his duties,’ and commit ‘to being the best he can at all times.’
Working for the Cricks Group means Joshua has exposure to a wide range of makes and models of cars, as well as to a very successful business operation – the company represents 16 automotive brands in five dealership locations across Queensland’s Sunshine Coast region. It’s a prized place to work and Joshua made a good first impression when he applied for a job there.

“Even though I didn’t have any previous mechanical experience, I think they could see that, as I was willing to spend four years doing a degree and then do an apprenticeship, I was serious!”

Currently at the Cricks’ Wises Road dealership in Maroochydore – which sells Renault, Suzuki and Ssangyong brands as well as used vehicles – Joshua has also done a stint at another of the company’s sites that sells Mitsubishi, Subaru, Skoda, and VW.

“Cricks is one of the highest-regarded companies here on the coast and it has been invaluable working in a place like this,” he said. “I have learned so much here. I have also learned a tremendous amount from my MTA Institute trainer Don Lerm. He has been an invaluable source of knowledge for me.

“Like anything, there have been good days and bad days, and Don has definitely helped me through it all. He really is a fantastic teacher.”
Like many automotive apprentices, Joshua knows the future is going to be one in which electrification plays a big part and continual professional development will be a key to success. Being part of the Cricks Group is useful as he is exposed to much of the latest automotive technology, and will be at the front line as brands make their electrical vehicle models available in Australia.

“The industry is evolving and yes, I absolutely will be looking at additional qualifications,” he said. “I have already talked to Don about doing the air conditioning course and I am very interested in EVs. Renault do a lot of that in Europe and while I am not sure about the training they’ll offer here in Australia, I imagine they will be doing something in the next few years. If I can get anything that will help me get ahead, that will be fantastic. I want to learn as much as I can.”