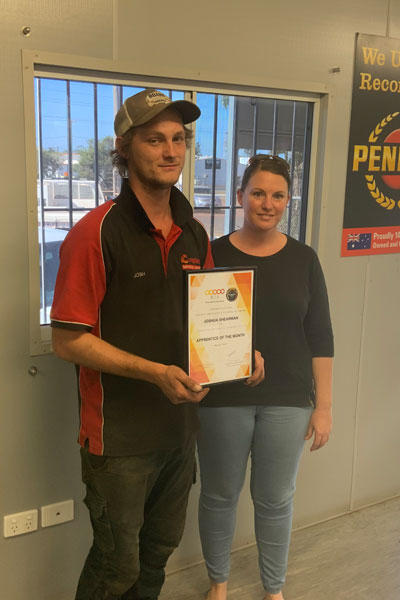 Joshua Shearman is the Apprentice of the Month award winner for March 2020.

The 20-year-old completed his training at the beginning of the year and works as part of a team of seven tradespeople and apprentices in the workshop of Warren Allen’s Complete Mechanical Support in Moranbah, a mining town located a couple of hours southwest of Mackay.

Having finished his training in about three years, Joshua proved himself to be an excellent apprentice – one that his employer said grew and developed to the point that he was taking younger employees under his wing and explaining to them the ‘how’ and ‘why’ of a job.

Developing into a top-class apprentice and tradesperson was always likely for Joshua – with his father being both a light vehicle mechanic as well as a diesel fitter, he was immersed in the car world from the earliest age.

“I grew up around cars,” he said. “I was always mucking around the shed working on motorbikes and cars with my dad. I didn’t really know anything else and just knew I wanted to be a mechanic. I liked doing the work, I was doing it at home, so it seemed a natural thing to do.”

After leaving school early, Joshua found work as a technician’s assistant (TA) at a local workshop that, after about a year, offered him the chance to start an apprenticeship. Unfortunately, and about a year into his training, Joshua had to go looking for another job when that business closed, and eventually found a new home at Complete Mechanical Support. After a period settling in and proving himself, Joshua was offered the chance to restart his training with MTA Institute.

“I came in to speak to Warren and he put me on as a TA and then put me on to complete my apprenticeship,” said Joshua. “And the training was really good. I think the one-on-one aspect of it is much better than learning in a classroom with other students. I didn’t really do that well in school, so the one-on-one training really helped me.”

Working at Complete Mechanical Support means Joshua trained and works on a wide variety of vehicles but, he said, light trucks were particularly plentiful.

“We do work on any vehicle here but, in the main, and seeing as this is a mining area, we do work on a lot of Landcruisers and HiLuxes,” he said. “You get to learn them inside and out, and I have a HiLux myself!”

Though he is now a qualified tradesman, like many young people entering the profession, Joshua recognises that the fast-changing nature of the auto manufacturers’ products means that constant training and updating skills is something that must be considered.

“I love what I do now, but I do think that I will look at doing more training,” he said. “The way cars are changing it would be a good idea to gain more skills and perhaps do something like auto-electrical training. Every year the cars that are appearing are different and there’s always more to learn.”

Apprentice of the Month, April 2020, Awngdan Daipha
Scroll to top