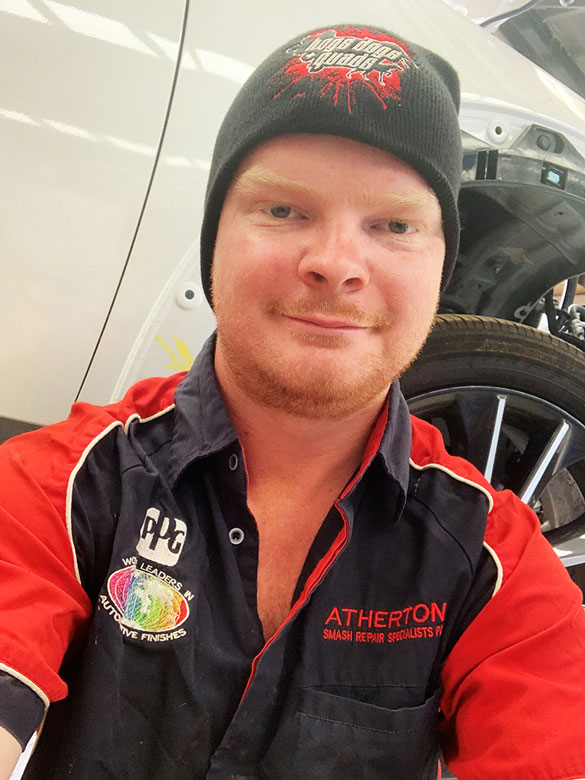 Jesse Weatherhead is the Apprentice of the Month for July 2019.

The 22-year-old Automotive Body Repair Technology apprentice is in his fourth year of training and is due to complete in November.

Being at Atherton Smash means Jesse is working at one of the most advanced smash repair shops in North Queensland – a tremendous grounding for any aspiring tradesperson. And Jesse has, according to his MTA Institute trainer Shane Palmer and employers Stephen and Karen West, taken full advantage of the opportunity, proving himself to have a great attitude and reaching the high standards the business expects.

“Jesse is willing to undertake repair procedures no matter how big the job,” said Shane. “He has a great relationship with other employees and his employer and shows very high standards. He is always attentive and shows great detail and pride in his work.”

A career in the automotive trades was always on the cards for Jesse as he has been involved in the stock car racing scene since he was a child. The rough and tumble of that category means he has been doing mechanical and body repairs for a long time.

“I’ve worked on cars all my life pretty much, fixing engines on the stock cars and that sort of jazz,” said Jesse. “My dad and brother were involved, and I got into it when I was about 12. I actually still have the car I started with – it has a Corvette body over an HQ chassis – but it needs a new motor and is in a bit of a pickle at the moment.

“One of my mates was working here at Atherton Smash. He told me they were looking for an apprentice and asked if I would be interested in coming for an interview, and that was that.

“And I love it. It’s great work and I do a bit of everything – pulling stuff apart to changing quarter panels, to using the car-o-liner for straightening chassis – and we work on everything from trucks to Mercedes, so there’s plenty of variety.”

Jesse said he may be interested in training in the paint side of the business at some point, but whatever he does, Atherton Smash looks to be where his future lies.

“It’s a great place to work and they are great to work for. I’m not going anywhere anytime soon!”