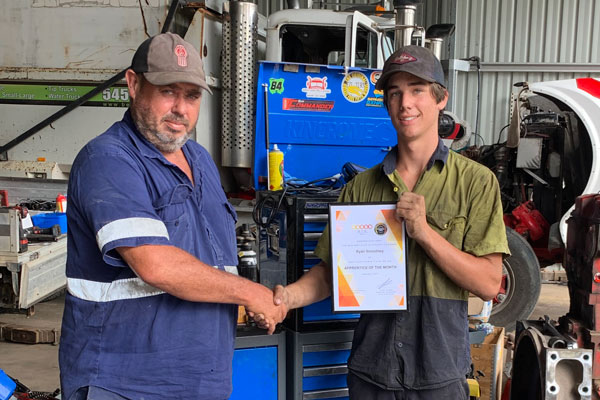 Ryan Smoothey is the Apprentice of the Month for December 2020.

The 17-year-old Heavy Commercial Vehicle apprentice has been working for Glen Alexander at East Coast Truck & Trailer in Gympie for the past three years and, according to his MTA Institute trainer Wayne Abrahams, has proven to be a standout student, able to perform a broad range of tasks at a remarkably high level.

Ryan started his career in the industry via a school-based apprenticeship, although that was originally with another business that offered agricultural equipment services. Unfortunately, that business went under leaving Ryan looking for another job and, as is often the case with motivated young people, he found a new employer through persistence – pounding the pavements and knocking on doors of workshops in the Gympie area.

“I went to what I thought was every single one in town, and they all said, ‘We just don’t have the work to take someone on’.” said Ryan. “Then, one day, I was going for a drive with one of my mates and I spotted this shop, East Coast Truck & Trailer, with a few trucks parked outside. I went in, ended up talking to Glen and he said, ‘I’m looking for an apprentice, I’ll see you here tomorrow at 7am’!”

Working for Glen at East Coast Truck & Trailer, and shifting over to a Heavy Commercial apprenticeship, has exposed Ryan to a huge variety of mechanical work. East Coast offers all mechanical services – including engine rebuilds and modifications – on everything from pick-up utes to major mining trucks and everything in between.

“A lot of the work we do is on things like big highway prime movers, but we also do Moxys and diggers, hydraulic rams and pumps, and I also recently rebuilt a Toyota Prado engine. We do work on quite a few Landcruisers too,” said Ryan. “We do everything here. You name it, we do it!”

Ryan said he was always interested in mechanical work and working at East Coast Truck & Trailer is a tremendously educational and enjoyable experience.

“Since I was really young, I enjoyed pulling stuff apart and putting it back together,” he said. “I started with my pushbikes, then with motorbikes when I was a little bit older, and I then started building motorised go-karts and so on. It went from there.

“And I love it here,” he said. “I was working on clutches and engine rebuilds and all that sort of stuff in my second year, and with only me and my boss Glen working here, there’s lots of opportunity to work on interesting jobs. Glen is really talented and has taught me so much and I now do full engine rebuilds, as well as clutches and gearboxes, by myself.”

Ryan has accumulated a massive amount of experience in a short time at East Coast and, together with the training delivered by MTA Institute, he is well ahead of the normal apprenticeship curve.

“I have a few mates who are apprentice mechanics and who are in their second or third year, and they have only recently started doing basic services,”
he said.

“And the one-on-one training works really well for me,” he added. “I didn’t enjoy school, and I don’t think I would do well in a classroom setting. Now, I get to train in the place where I do my job, and that works really well both for me and the business.”

Already in his third year, Ryan will likely be qualified by the time he is 19, and his plans for the future start, he said, with a commitment to East Coast Truck & Trailer.

MTA Institute Trainers Gather for Annual Conference and Trainer of the Year...
Scroll to top