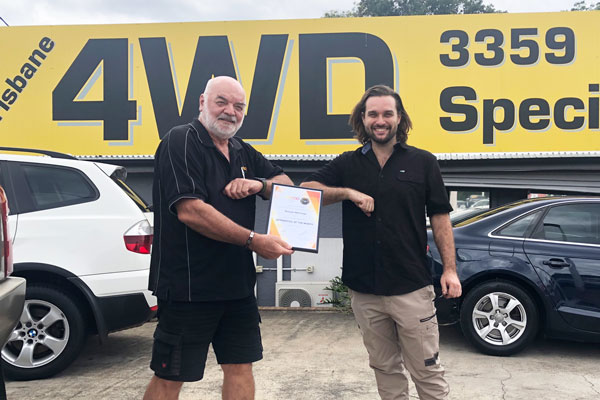 Samuel Hennings is the Apprentice of the Month for February 2021.

Now in the fourth year of his apprenticeship, Sam has, according to his employer and his MTA Institute trainer Roger West, been an outstanding employee and student, showing real passion for the work and a commitment to ‘get his hands dirty and give everything a go’.

At age 33, Sam’s move into an automotive apprenticeship has taken an unusual route and comes after working for several years in healthcare, first as a pharmacist and then, briefly, dentistry.

Healthcare seems a world away from automotive as a career choice but, like many people, it took Sam a while to realise what he really wanted to do. Unlike many others, however, he decided he would leave the security of the career he had built and dive into something completely new.

That’s a gutsy move, but while a shift from healthcare to automotive does seem like a big leap, for Sam the switch was a logical one.

“Out of school, I did what people thought I should do, and so I became a pharmacist and worked in a hospital for about six years after I graduated,” said Sam. “It was good money, but not particularly satisfying, and so I started looking around for something else. I started studying dentistry and did that for about six months but realised I was doing it for the wrong reasons.

“It was my girlfriend who said I should look out of the box a bit and start to think about what I was really interested in.

“When I was growing up, my dad was always tinkering with the cars he had, and I have always been interested in how things work and was starting to do some things on my own car.

“So, I approached Drew, the boss here at Brisbane 4WD, about doing some work experience, and everything sort of fell into place. A couple of months later I started the apprenticeship.”

Some three years have gone by since then and Sam has found the career he was searching for, his enthusiasm as keen as the day he started his training with the MTA Institute and Roger West.

The MTA Institute’s method of education delivery – which involves one-on-one training in the student’s place of employment – has worked very well for him.

“The drive is there, I enjoy all aspects of what we do, and I’m interested in learning more,” he said. “And the one-on-one training really works. I’m sure all the trainers are great, but I do feel quite lucky to have had Roger as my tutor. He’s really great and very knowledgeable.”

Now approaching the end of his apprenticeship, Sam works on just about every job that comes through Brisbane 4WD, a business that specialises in 4WD sales. That means getting vehicles ready for sale, inspections of trade-ins, servicing and warranty work on vehicles sold through the business, and fitting accessories such as bullbars and spotlights.

It is, said Sam, enjoyable and varied work, but he recognises that the industry is going through something of a revolution and that the new career path on which he has embarked will likely mean more training is just around the corner.

“There’s more to learn, and I would like to gain more exposure to things like hybrid systems which don’t seem to have filtered across to four-wheel-drives as yet,” he said. “I think that does mean I’ll be looking at more training.”

Apprentice of the month, March 2021: Joshua Frampton
Scroll to top