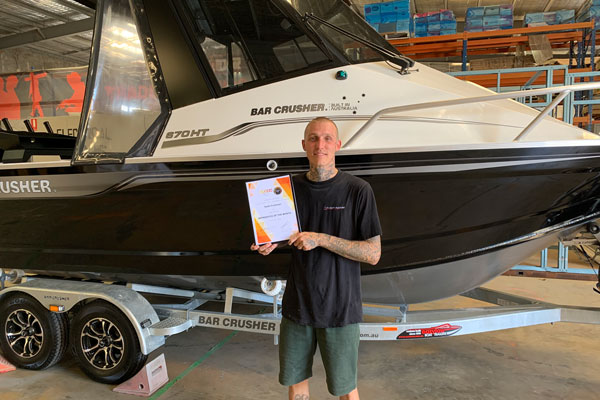 Keith Forstman is the Apprentice of the Month for December 2020.

The 31-year-old, who has worked at Flight Marine in southeast Queensland for the past four years, has now completed his spray-painting apprenticeship, and throughout his training he proved to be an outstanding student.

“Keith has been one of my best apprentices,” said Alfio Rotolone, Keith’s MTA Institute trainer. “He can adapt to any environment and task, and always performs to the highest standard. His attention to detail is off the chart.”

Keith made his move into spray painting after spending a few years as a warehouse storeman. While searching for a job that offered more opportunities for him and his young family, he learned that Dave Worley, owner of Flight Marine, was looking to take someone on.

Flight Marine offers spray-painting services and abrasive blasting services for a wide range of products, but its focus is predominantly on boats and for Keith, securing a role with the business was a great opportunity. However, he did not have expectations of becoming a tradesman when he first started the job. In fact, he had never really considered spray painting as a career.

“My uncle is a panel beater and spray painter and I would visit his workshop when I was a child, but it never crossed my mind as a career option,” he said. “But I wanted a change, I wanted to challenge myself, and I wanted something better for my family. Dave gave me a go, but because of my age I didn’t come here thinking about an apprenticeship.

“I spent about 18 months helping out, masking everything up, sanding everything and pretty much doing the jobs a new apprentice would, before Dave offered me the apprenticeship opportunity. Those 18 months were actually a good foundation for when I started training.”

While many of the skills required by those who spray paint boats are the same as for those who are automotive spray painters, there are some differences between the jobs that, said Keith, take some getting used to. While a layperson might think painting a boat involves just painting the hull, there’s a lot more to it.

“It’s not just the boat body,” said Keith. “There are a lot of parts to consider – including the roofs, tops, lounges and seats. They are quite big jobs, and the owners want an automotive finish on them. They want quality.

“We have to hop in and out of the boats to do the job,” he added. “90 per cent of boats don’t have floors when we work on them, so you have to climb through the framework and be careful not to leave any marks in the paint.

“It can be quite tricky, and it is very satisfying seeing the finished job. When you pull the boat out of the booth and it’s looking nice, that is a good feeling.”
Regarding his apprenticeship, Keith said the MTA Institute’s one-on-one training model had been a great experience.

“The training method worked perfectly for me and I couldn’t have asked for a better trainer than Alfio,” he said. “He helped me every step of the way and I wouldn’t change anything. It all went really well.”

Now qualified and taking on the role of head painter for Flight Marine, Keith is set on a rewarding career doing work he really enjoys. And he is already looking ahead to where that career can take him.

“I have studied at the MTA Institute with some of the trainers there and, ultimately, I think I would like to do that someday – a job where you are doing the work you enjoy but are passing on your skills,” he said. “I always think long term, and that is my long-term goal.”

Apprentice of the month, January 2021: Ryan Smoothey
Scroll to top