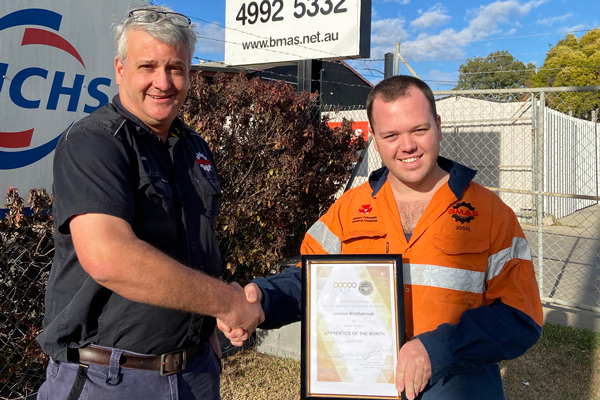 Joshua Middlebrook is the MTA Institute Apprentice of the Month for August 2021.

The 24-year-old has just completed his Heavy Commercial Vehicle apprenticeship but has accomplished plenty more in the four years he has worked for BMAS Biloela.

In that short span of time, Joshua has lived up to the workshop motto of ‘Do it once, do it well’ and also completed a light vehicle apprenticeship, has qualified as an Approved Examiner, gained his automotive air conditioning licence, and become a Massey Ferguson trained technician. It’s quite a résumé!

And all those skills come in useful at BMAS Biloela, with the business offering a wide array of services – including mobile repair and maintenance services to the many agricultural businesses in the central Queensland farming region – enabling Joshua to work on everything from power equipment to cars, and from trucks to tractors.

“We work on pretty much anything that has an engine, and we also do hydraulic rams, some auto electrical work, air conditioning, and a bit of fabrication too,” said Joshua. “I work in just about every area, and I like that. It’s really varied work and you don’t know what you’re going to be doing the next day. It’s how I like it. It keeps things interesting, that’s for sure.”

Joshua’s interest in mechanical work began when he was a teenager working on a farm where there was plenty of machinery to maintain and repair.

“Anything that was broken down we tried to fix, and I thought it was pretty cool to be working with my hands, be out in the sun and not sat in an office,” said Joshua.

“Then I learned that BMAS were looking for a TA, so I came down, did a couple of other things so they could see what I knew and what I was like with tools and so on, and they offered me an apprenticeship.”

While very interested in working on the heavy vehicle side of the industry, Joshua was keen to get moving in a mechanical career and took on the light vehicle apprenticeship that BMAS offered, completing that training in 2020.

Thanks to his trainer at the time – who knew of Joshua’s interest in heavy vehicles – Joshua was also exposed to plenty of heavy commercial training units at the same time, a move that enabled him to complete a heavy vehicle apprenticeship relatively quickly when one became available.

While he is now dual-qualified, Joshua’s enthusiasm for the industry, and his recognition that it is becoming more technologically advanced, means he will look to expand his skills further.

“I’m all for learning new things and I will definitely be looking at auto-electrical training at some point,” he said. “If you look at modern engines, they are completely different to those from back in the day and there are that many modules and computers on them now. So that is the next trade I would like to do.

“You can never stop learning. You have to keep up to date with modern gear that is being rolled out.”
However, while certain more training is in his future, Joshua said a short break was probably in order before heading down that path again.

“To be honest I wouldn’t mind just enjoying my trades for a while and taking that break from training,” he said. “I need to focus on those and get some experience under my belt, but then I’ll definitely look towards the auto electrical trade.”

With plenty of skills already attained, and more training on the way, a very exciting career in the automotive industry is on the cards for Joshua, and it is one that he will pursue. But, interestingly, there are other interests unrelated to automotive that will also play a part in his future, including his work as a part-time firefighter with the Queensland Fire Service.

“I wouldn’t mind seeing what else is out there and maybe try different things,” he said. “It excites me that there is always something to learn out there.”