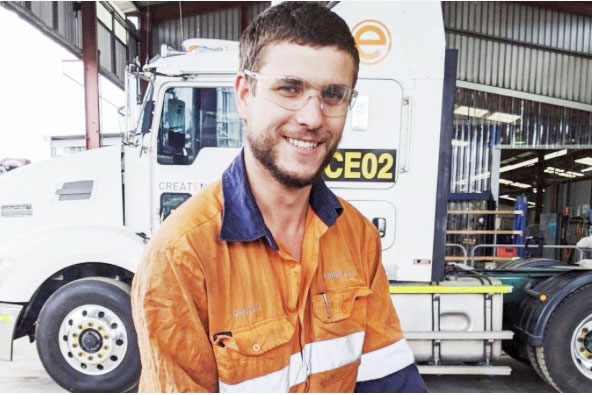 Quintin Smith is the MTA Institute Apprentice of the Month for August 2020.

The 23-year-old, fourth-year, auto-electrical apprentice works for the SMW Group in Rockhampton and has impressed with the top-notch quality of his work as he pushes towards completing what will, in fact, be his second apprenticeship – he completed his diesel fitter trade qualification with SMW a few years ago.

Working towards being dual-qualified gives an idea of Quintin’s passion for the industry but also the wide variety of work done at SMW Group. The company offers a wide range of services including mechanical servicing, engineering, fabrication and the manufacture of heavy equipment components for the mining industry.

“We do a wide range of work, but mostly mining equipment such as haulage trucks, dozers, graders, and ancillary machinery,” said Quintin. “We do go out to mining sites every now and again to do support work, but I do enjoy being in town because when equipment comes to the workshop it usually needs pretty major diagnostic work, which I enjoy.

“In the whole facility there are about 60-80 people at any one time on site – boiler makers, painters, fitters – and in our shop there’d be about 20 fitters, auto-electricians and machinists. We are a pretty big business and there is quite a bit going on.

“It is good working for a big company because you do get diversity in your work. You’re not working on just one type of equipment all the time but doing all manner of jobs such as diagnostic work, installs and fitouts and so on.”

With his dad being a diesel fitter, it’s no wonder Quintin first became interested in that work. However, like many of the younger generation who enter the industry, there is recognition that the emergence of electric vehicles and new digital technologies means that having auto-electrical skills will be very useful.

“I started that first apprenticeship when I was about 16 and left school to take the opportunity,” said Quintin. “My dad has been a diesel fitter for many years and I liked the nature of the bigger equipment – it is different to what you see driving around town and you have to go out of your way to work on that type of equipment.

“Back then, I didn’t think about auto-electrical or knew much about it, but after doing the diesel trade I thought, ‘I like the electrical side a bit more’. I find auto-electrical to be more involved and it’s a trade to build on. Electric vehicles are appearing and there are autonomous systems in mining and haulage, and all that is tied into auto-electrical.”

Quintin completed his first apprenticeship with another provider but has been working with the MTA Institute for all of his current training. And the one-on-one training method used by the Institute has, he said, been particularly useful for him.

“That method is good because, with the trainer coming to where you work, you can discuss the jobs you are doing at that time. That is useful because there are differences between auto-electrical in a light vehicle workshop and the mining industry.”

With just a handful of modules left of his auto-electrical apprenticeship to complete, Quintin will soon be dual-qualified and looking to make the most of the skills he has worked hard to acquire.

“I enjoy working for SWB and I like the idea of working up through the ranks from apprentice to tradesman to senior tradesman and so on. And there are opportunities here, which is great.”

Winning the Apprentice of the Month award means Quintin is now a finalist for the MTA Queensland’s Apprentice of the Year award, the winner of which will be announced at a special event on October 16. He is, he said, a little nervous but proud to be a finalist.

“I’ve never had anything happen to me like this before,” he said. “It is great to be recognised.”