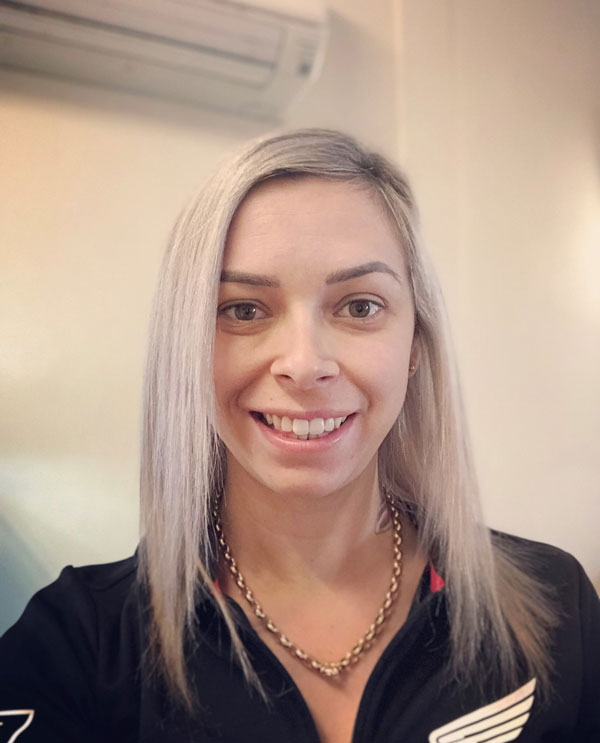 Kimberley Wallace is the MTA Institute Apprentice of the Month for August 2019.

The 31-year-old, who recently completed her parts interpreting apprenticeship, works at Morgan Motors – a Honda motorcycle and power equipment dealership – in Emerald and during her training showed great aptitude and great appetite to learn and develop her skills.

Punctual and professional, ready to take on extra responsibilities when asked – and trusted to do so – Kimberley has shown great initiative and, her employer says, ‘always puts in 110 per cent into her role’.

According to her former trainer from the MTA Institute, Peter Jaensch, Kimberley goes the extra mile to help customers and excelled during her training.
“In her last assessment on merchandise products, Kimberley achieved 100 per cent on her first attempt. She is only the third person to do so in my year of training apprentices,” said Peter. “She is bright and cheerful, very organised, achieved well in her theory work and excelled in her apprenticeship. Nothing is too hard for her.”

Working as a parts interpreter was not necessarily Kimberley’s first calling, but the role always held appeal. She had worked, along with her mechanic brother, at another workshop in Emerald and while she left for a time to pursue a career in retail, she returned to the automotive industry at Morgan Motors and grabbed the apprenticeship opportunity as soon as it came along.

“A couple of guys were here doing the parts interpreting course, but they moved on and the apprenticeship was offered to me,” said Kimberley. “I jumped on it straight away because it was something I was interested in and I really wanted to better myself, I suppose.

“And I enjoy what I do,” she added. “We work to make people’s lives easier. It’s up to us to make sure customers get the correct parts they need and the right maintenance products and accessories, and it’s important we do the job in a friendly, professional manner.”

As for the future, Emerald and Morgan Motors looks like they will play a big part in Kimberley’s life.

“I plan on sticking around with Morgan Motors,” she said. “At least until the next chapter of my life starts, which could be starting a family. Actually, the boss has told me that there’ll be a room for the baby, so I guess I’m never leaving!

“So, I’ll stay and continue to train and maybe learn the business side of things. We’ll see.”