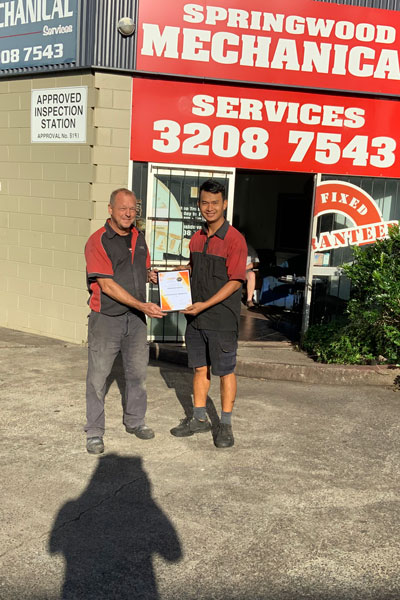 Awngdan Daipha, also known as Dan, is the Apprentice of the Month award winner for May 2020.

The 35-year-old mature age apprentice works at Springwood Mechanical in Brisbane, is in the fourth year of his light vehicle apprenticeship and is just a handful of months away from completing his training. While the qualification is now tantalisingly close, it has been a long and bumpy road for Dan to get to this point. His story is quite inspiring.

Born and brought up in Myanmar (formerly Burma), and having learnt English from from St. Columban’s Catholic Priests and De La Salle Brothers, Dan moved to Australia in 2010, taking a job at Toyota’s manufacturing plant in Melbourne. Unfortunately, it wasn’t long before the first significant changes to the nation’s vehicle manufacturing capability were being announced and, following on the heels of Ford and Holden, Toyota revealed in early 2014 that it was to close its factory.

For Dan, the closing of the plant was a blow, but started him on a new direction in his career journey – a direction that would see him offered a job, then an apprenticeship, in Queensland and, after a couple of false starts, an apprenticeship with Springwood Mechanical. For someone born in the northern, predominantly farming area of Myanmar, it has been a very long road to this point.

“When I lost my job at the Toyota Camry factory, I really wanted to stay in the industry and get an apprenticeship, but I think employers were looking for someone a bit younger than me. I tried for about 18 months to find someone to take me on but was always rejected,” said Dan.

“Then, a friend of a friend who ran a workshop in Brisbane offered me a job, so I moved up here in 2015. I worked in that workshop on a trial basis for a few months and was signed up for an apprenticeship, but just a few months later the business was sold, and I was unemployed again.

“I managed to get another job, but in the second year of my apprenticeship that business was downsized, and I had to look elsewhere again,” added Dan. “I had a lot going on at the time – I had just got married and bought a house – so it was great when Springwood Mechanical took me on.

“I come from a farming background in northern Myanmar. There were not many cars there,and when I was growing up my country was locked down and separated from other countries by a dictatorship, so the cars that were around were really old. That meant the mechanical industry was not popular and there was not much opportunity.

“However, I really wanted to do that work, so I was very glad to get into the industry here.”

The sort of passion Dan has shown to pursue his automotive dream is enviable and he is proving to be an outstanding apprentice.

“He has overcome significant obstacles to achieve his lifelong goal, and he is an exceptionally good student with his on-the-job performance and his theoretical work,” said Andrew Bellars, Dan’s MTA Institute trainer.

The training is unlikely to stop once Dan does achieve that goal of becoming an automotive technician.

“I really enjoy what I am doing, and I might start my own business one day,” he said. “But I will pursue further qualifications too. The industry is changing and I want to be equipped with as much knowledge as I can.

It is a very interesting time.”