The Gold Coast 600. It’s the 13th event on the Supercars calendar and one of the most spectacular. Raced along the streets of Australia’s playground city, the thunder of V8 engines echoes off the high-rises that line the track and 200,000 fans flood the race venue to enjoy racing that is always wickedly quick and highly competitive. This year, to add to the fun, the Supercar circus included support category racing that included rounds of the Porsche Carrera Cup, Formula 4, Aussie Racing Cars and V8 Utes. 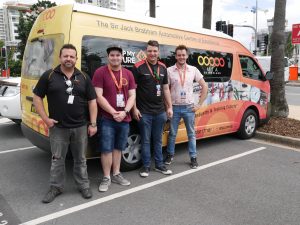 Taking place from the 20th to the 22nd October, this year’s GC600 was a special one for MTA Queensland as three of the nominees for the MTA Institute Apprentice of the Year award – Elliott Lemmon, James Corbett and Corby Marshall – were able to attend the Friday practice day, experience a tour of the 888 Race Engineering Team Vortex pit garage and get to meet and chat with the team’s star driver, Craig Lowndes.

Organised by team sponsor and MTA Queensland corporate partner MTAA Super, it was a fantastic experience for the nominees and meeting Lowndes – a trained mechanic himself – was a highlight.

Following the Team Vortex tour, the nominees were free to enjoy the rest of the entertainment the GC600 had to offer and take advantage of the passes they had been awarded as part of their Apprentice of the Year nomination prize.

For the record, Chaz Mostert and Steve Owen of Supercheap Auto Racing took out Race One of the GC600 in their Falcon FG/X while Scott McLaughlin and Alexandre Premat secured Race Two honours. The results left Jamie Whincup of the Red Bull Racing Team, who came in 6th in Race One and 2nd in Race Two, in the championship lead.

Apprentice of the Month, October 2017- Will Rudd
Scroll to top